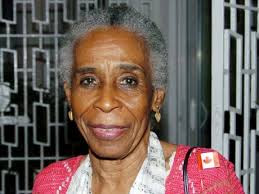 Cultural visionary, pioneer musicologist, and founder of the Jamaican Folk Singers Dr. Olive Lewin is dead. Lewin, 85, drew her last breath Wednesday night at the University Hospital of the West Indies after experiencing respiratory problems for quite some time.

As the driving force behind the recording of Jamaican folk music and theatre for more than six decades, she gained international respect, and was also celebrated as an author, ethnomusicologist and social anthropologist. Dr. Lewin had also served as director of arts and culture in the Office of the Prime Minister as well as director of the Jamaica Institute of Folk Culture, and of the Jamaica Orchestra for Youth.

In 2001, she was conferred with the Order of Distinction was later made a member of the Order of Jamaica (OJ). Below, tributes from family and Jamaican public figures:

Major Joanna Lewin, daughter: "She was an amazing woman. She dedicated her life to this country. Her work was so pivotal in how we should establish ourselves as a people...but I almost feel that her work was in vain."

Former PM Edward Seaga, with whom Lewin worked closely for decades in preserving Jamaica's folk history: "Her passing is a great loss to the country. I consider her the icon of Jamaican folk music. She was the person I entrusted with the collection of Jamaican folk songs in the 1960s."

Opposition spokeswoman on culture, Olivia 'Babsy' Grange: "She worked hard to preserve our folk culture and was instrumental [in] securing a massive amount of our oral experiences. I am shocked and saddened and emotionally shaken, because when you think of Dr Lewin, you think of her as perpetual, because of the aura she carried as a dedicated, patriotic Jamaican — dedicated to culture and the arts. Words can't... explain the high esteem with which I regard her and the contribution she has made to my personal development, and the development of numerous others. She gave of herself fully, and Jamaica owes her a lot for how much she did in preserving and promoting Jamaican culture."

Lisa Hanna, Youth and culture minister: "When you talk about Louise Bennett and you talk about folk music, [Dr. Lewin] was tantamount to really giving us the appreciation of folklore, folk music, etc.... She really has left a mark, an indelible mark. She was really a colossus in this area of culture. She will be greatly missed."

Prime Minister Portia Simpson-Miller: "The passing of Olive Lewin leaves a great void in the pursuit and preservation of Jamaica’s traditional music and cultural art form. Jamaica has lost an invaluable cultural icon. She was a fine Jamaican lady in every sense of the word, who exhibited consummate humility and gentility with a great heart for service. It was those very qualities which saw her bringing into our schools, correctional and mental institutions the power of music and Jamaica’s rich cultural tradition in soothing the soul and lifting the spirits of our people. Dr. Lewin led a truly exemplary life and we honour and salute the outstanding contribution of this most beloved Jamaican patriot and sister, who not only distinguished herself locally but across the region and internationally."