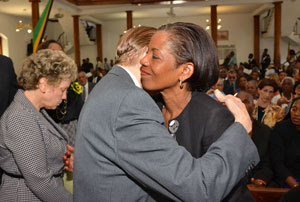 The emotional two-hour memorial service, which received a huge turnout, featured musical tributes from the Jamaican Folk Singers (which Lewin started in 1967), energetic drummers, among other artistic groups, and eulogies from the likes of former Jamaican Prime Minister Edward Seaga and daughter Major Joanna Lewin.

"I wish I could feel it in my heart, that she was fully recognised in her own life," said Seaga, who was moved to tears while speaking. "She goes to her grave only partly covered in the glory she deserves... But God knows this woman of grace, this missionary of our music, this cultural ambassador was a heavenly icon, and he will do the rest to grace her soul as she deserves."

"We have a rich, beautiful and varied musical heritage, and our people have suffered for generations," said Joanna Lewin. "My mother fully recognized this, and she lived her life for the betterment of Jamaica, land we love. Please don't allow her legacy go to rest with her."

The celebrated musicologist, folklorist, and educator -- who passed away at the University Hospital on April 10 at age 85 -- was laid to rest in the churchyard of the St. James Anglican Church in Hayes, Clarendon. But not surprisingly, her life and legacy continues to inspire and will undoubtedly continue to do so for generations to come.

"We continue to proudly embrace our responsibilities as an agent of cultural reproduction in Jamaica," said Christine McDonald-Nevers, present musical director of the Jamaican Folk Singers, "remaining committed to the belief that folk music is a part of our Jamaican heritage worthy of preservation."

Posted by TALLAWAH Magazine (tallawahmagazine@gmail.com) at 9:47 am