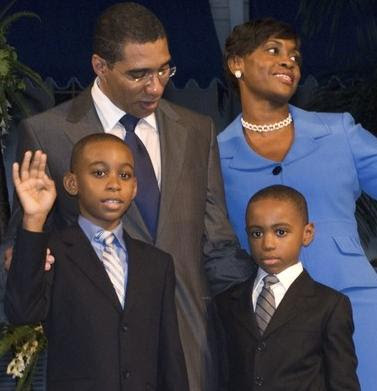 KITH AND KIN: Holness with wife, Juliet, and their two young sons.

Many top-tier politicians are reluctant to speak about, let alone showcase, the private persona behind their public image. Andrew Holness is not one of them. On Sunday evening, the charismatic Opposition Leader appeared as a guest on CVM's The Karen D Show, where he didn't skimp on the candour as he spoke at length about raising young sons, the sacrifice that made his marriage work, and how growing up poor helped him become the stalwart he is today. Below, excerpts from the interview:

On getting over the loss of the 2012 General Elections: "I won't let failure be a permanent obstacle. I wont dwell in the past. The sign of a strong person is how they conquer their adversities and how they turn their loss into a victory. When you're in politics, you prepare yourself to accept the will of the people. My job is to serve the people, and I have supreme faith and confidence in the Jamaican people."

On rising above his critics and detractors: "I've been consistent. The people who oppose me find it very hard to frame me. I am who I am, and what I am is consistent. I believe in that and in sticking to my principles. And in the end, I believe I am a stronger person for that."

On his fun and lighter side: "The politics is always there, but you have to find time to do other things. I play chess, and I took up running. I do some other activities like riding. I also do some amount building designing on the computer. And I also do some amount of computer programming for fun. 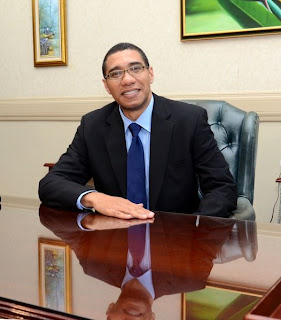 On raising two young sons, ages nine and 11: "I now get to spend a little more time with them, and it's very rewarding because they are at that age when they are transitioning into adolescents. I think it is very important that they appreciate what they have and that will allow them to appreciate others. I have passed on some of my life lessons to them. They are very young, but I'm trying to groom them from early."

On the sacrifice that made his marriage work: "[My wife and I] have developed a very good mechanism of working things out. She knows me very well. She's allowed to do what she wants in terms of her career, and I try to not let what I do interfere with her work. So she's able to pursue her dreams and I pursue mine. My advice is allow your partner to be able to flourish and achieve their own dreams, and support each other."

On his coming-of-age years: "It was a very difficult time. I grew up under poor circumstances, but I never let that be an obstacle. Though we were poor financially, we were always proud and ambitious people. And I believe that pride and ambition stuck with me and gave me the drive to achieve. We learnt the importance of sacrifice and the principle of being very frugal, and it certainly served me well.

On the man he is today: "I am different by virtue of having had greater experiences and having the experience of leading a country for a period of time and going through an election. So I believe I am far more knowledgeable now and experienced. But as a person, in terms of my principles, I'm still the same."