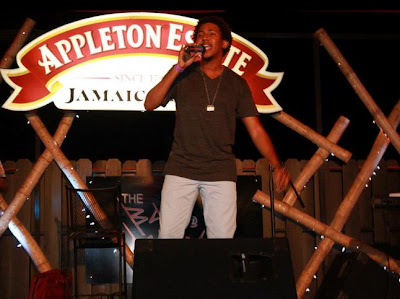 When Mario Evon says his distinctive sound is where reggae and dancehall meet R&B and soul, you better believe him.

The fast-emerging vocalist stayed true to his signature style on Monday night, as headlined the latest concert in the Live & Revive series at Kingston's Macau Gaming Lounge. The audience ballooned as the night progressed and so too did Evon's acoustic playlist, which featured a marvelous anthology of his favourite tunes and nods to his musical influences, comprising everyone from Beres Hammond to Bob Marley.

Speaking of Marley, a soul-stirring take on "Could You Be Loved?" served as the set opener, making way for renditions of Evon's original number "You Used To Love Me". He then raised the wow factor with superb takes on Hammond's "Hope We Never Get Tired" and Third World's "How Could It Be Forbidden?" He made light work of Miguel's "Adorn" before making his way into the audience to perform "The Unchained Melody" for a birthday girl, displaying impressive vocal dynamics in the process.

Ditching his fancy white dinner jacket, Evon then surprisingly launched into a spirited version of LMFAO's "Sexy and I Know It" (proving himself a clever song stylist), which was followed by Justin Timberlake's "Suit & Tie" and his own "Love in the Morning." Audience members showed their appreciation via resounding applause for cuts like "Sea of Love" and "Water Run Dry" ahead of encore performances of "Like A Star" and the longtime fan-favourite "Turn Your Lights Down Low."

Though memorable and engagingly performed, Evon's set would have truly benefitted from the inclusion of more original songs, to add greater balance to the night's repertory. Still, the singer's blend of reggae, dancehall, R&B, soul and pop proved an entertaining mixture and reinforces my belief that artistes of his calibre deserve to be better known.