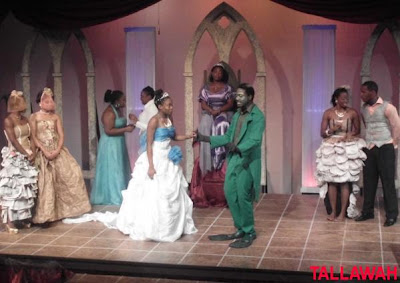 AT FIRST BLUSH: Ella and The Frog Prince have a dance at the ball.

The fairy-tale classic Cinderella has long fascinated readers and dreamers alike, with its stirring tale of true love, and the underdog rising above pitiful circumstances, while speaking to the possibility of achieving the elusive dream of happily ever after.

This month, the Children's Theatre Workshop at the Edna Manley College has revisited the beloved tale, taking creative liberties in crafting a modern, edgy update (dubbed Cinderella's Chronicles) while keeping most of the original plot points firmly intact.

The result is a sporadically rousing and funny production bolstered by terrific costume design, vivid lighting, and regular bursts of exuberance that win over the audience, particularly the kids (accompanied by older guardians), who made no bones about voicing their delight via intermittent squeals.

True, the quality of the acting leaves much to be desired and at times the elastic staging threatens to upstage the overall story. Still, one finds that the winning combination of ample humour and Cecile Strudwick's commendable musical score, coupled with Susan Steadman's script and Pierre LeMaire's steady-handed direction, keep things satisfactorily buoyant.

Though she's a budding actress of limited expression, I was left particularly impressed by female lead Shanice Christie, who makes for a believable Ella (apparently that's Cinderella for short), overworked and bullied by the wicked stepmother (Marilyn Clarke) and stepsisters (Sasha Bellnavis and Sammiel Walker).

Kimberley Smith, meantime, proves a ton of fun and energy as the groovy fairy godmother with a taste for Bob Marley, yoga, words like copasetic, and cool gadgetry that transforms animals into humans and even controls time. Then there's the green-clad Akeem Mignott, who interestingly brings offbeat charm to the role of the Frog Prince.

As it stands, Cinderella's Chronicles neither enhances nor diminishes our love/appreciation for the timeless tale, but kudos are due to the show's creators for eschewing a by-the-book approach to this well-worn saga that has also inspired recent stage hits like Glass Slippaz.

Delivering a finger-snappin' set of musical numbers and lively choreography, the show (nicely moderated by a pair of curious teen girls on a museum visit) manages to entertain and delight, despite its limitations, while offering wholesome lessons and something to ponder. Tyrone's Verdict: B