HAVING HER SAY: Olympian Melaine Walker breaks silence on move to Racers and her future 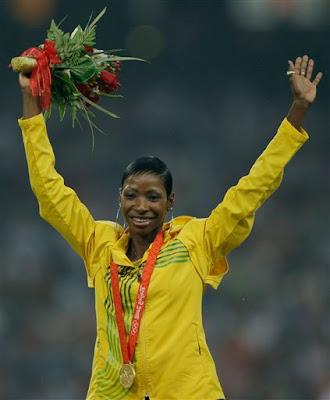 FEELING GOLDEN: "I am not afraid of what is to come," says Walker

In a television exclusive, aired earlier this week during Prime Time News, Olympic gold medallist Melaine Walker spoke out for the first time about her surprising decision to sever ties with the MVP Track Club and join the UWI Mona-based Racers family.

As it turns out, Walker, who has competed internationally for Jamaica in the 400M hurdles, had her heart set on switching to the sprint hurdles -- a prospective move that didn't sit well with MVP's coach Stephen Francis. A tiff ensued and culminated with Walker walking away from the UTech-based club after a six-year stint.

"Over the years being [at MVP], I've been neglected. I don't know for what reason, and because I'm not the type of person to come out and say anything, it continued happening," Walker explained in the interview moderated by reporter Kayon Raynor. "And many things have been going on over there, and if you've been paying attention you'll realize that many other athletes have parted ways with Stephen Francis, and the biggest reason is neglect and the dictatorship of our lives."

Having officially signed on to represent Racers during this new chapter of her career, Walker says she's acutely focussed on the requisite physical and mental preparations that come with being a sprinter. "I have gotten more instruction [at Racers] and it's been a lot more informative in three days compared to six years with Stephen Francis," says the 30-year-old athlete. "The coaching staff here is a lot more flexible. They correct me when I do things they feel are wrong, and I feel very comfortable working with them."

At the same time, Walker seems fully cognizant of the bigger picture. "Things never happen before their time, and by the grace of God I will excel in this event," she says. "I am not afraid of what is to come. I will embrace it and develop myself into something greater."