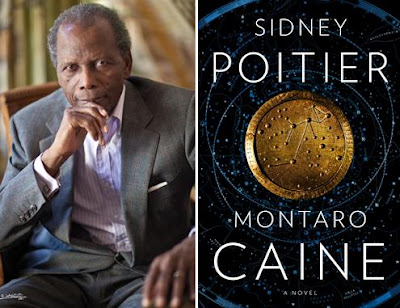 Oscar-winning screen legend Sidney Poitier first waded into literary waters with the 2007 release of his acclaimed memoir, The Measure of a Man, which was an Oprah Book Club selection and climbed to number one on bestseller lists internationally. His publishers Spiegel and Grau will be hoping for the same sort of feverish response when Poitier releases his first novel on May 7.

In his debut fiction release, Montaro Caine, the 86-year-old beloved actor and director takes readers on a wild and unexpected adventure -- from New York to Europe to the Caribbean and beyond. The novel offers Poitier’s heartfelt message about the potential each of us has within ourselves, and about being open to the possibility that there are mysteries in the universe, and here on Earth, far greater than we can imagine. Hailed as an enthralling journey into the magic of existence, Montaro Caine is a radiant debut from an American icon.

According to Booklist, Montaro Caine (centred on a mysterious coin that imparts wisdom) offers a “captivating blend of corporate intrigue and science fiction...a thought-provoking tale of caution and hope that is as elegant and riveting as the legendary actor and director himself." Publishers' Weekly, meanwhile, describes the 320-page novel as “surprisingly intricate, and is sure to please [Poitier's] many fans."