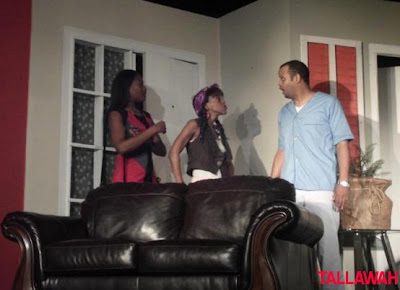 YOU, ME & SHE: Sparks fly as Hazle and Patterson confront Scott-Stewart.

Parental Instinct, currently running at the Pantry Playhouse, centres on the complexities of fatherhood and viscerally dissects approaches to relationships, yielding mixed overall results. But, make no mistake, it's an intimately revealing and entertaining roller-coaster, featuring some tear-jerker moments and commendably strong performances from a talented cast led by Orrin Scott-Stewart in the pivotal role of Mark Frazer.

Mark is a decent, brilliant and successful MoBay-based lawyer (and a bit of a momma's boy) involved with Alicia Smith (Stephanie Hazle), an uptight but very attractive weather-girl who won't bear him any children. So the relationship is at a delicate stage. Arguments, screaming, shouting and doors being slammed. By all appearances, Mark and Alicia lack the essential chemistry to truly make their love story work.

As it turns out, Mark had a fling with one Martina Rodriguez (Keisha Patterson), a ball of vim and spunk, with a taste for fishnets and booties. But she's a down-on-her-luck kind of girl, and the audience gets to witness her simplistic living conditions in the wake of the pregnancy bombshell she drops on the unsuspecting Mark. Love-triangle alert!

Given that he's been having major problems with Alicia, Mark discovers a sense of personal fulfilment in the early circumstances attendant to having a baby on the way. In his quirky/manly way, he vows to be the world's greatest dad. But before long problems emerge. "I used to feel like I was immortal. I used to feel like I could conquer the world," he laments at one point. Years later, his world is positively rocked when Martina re-enters his life with shocking revelations.

Though it's a play that yields mixed overall results and suffers from a few overlong scenes (a bit of editing would have helped), the writing soars in its most intensely dramatic moments and elicits big laughs in its more comedic ones. This is perhaps David Tulloch's safest play, in terms of keeping the sordid provocation under wraps, offering instead a thought-provoking meditation on the struggles of single fatherhood, the cost of infidelity, and the price of dignity. Throw into the mix themes like class, hot-button subjects like abortion and single parenthood, and a dash of humour.

The visually rich set and appealing lighting design are among the play's strongest assets.

Under Douglas Prout's even-handed direction, Scott-Stewart brings poignancy and power to what could have been a cloying role. As Alicia, Hazle delivers some flashes of controlled brilliance, but her part is mostly informed by a laid-back sort of poshness and an uncompromising demeanour. Patterson offers a heartfelt and (occasionally) hilarious performance. It's the most expressive role of her career. And as Shanna, Mark and Martina's pride-and-joy, young Leanne Bailey shows she could have a promising future in theatre.

Where Paternal Instinct succeeds most is in its realistic depiction of how fatherhood can change a man, as he grapples with the unexpected and instinctively works to make a difference in his child's life, in spite of his own shortcomings and the obstacles in his way. The play's overwrought conclusion is pretty sentimental stuff, but audiences will appreciate, and indeed enjoy, this true-to-life tale of love and family, commitment and consequence. Tyrone's Verdict: B

Posted by TALLAWAH Magazine (tallawahmagazine@gmail.com) at 1:54 am