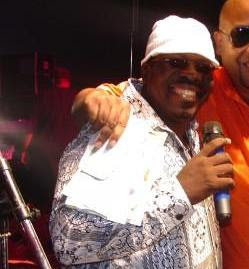 Never quite felt Jerry D's vibe? Prepare to be won over this time around.

It's been seven years since RJR listeners last heard from the garrulolus Jerry Davy, and we are happy to report that the Vibesmaster has impressively managed to maintain a jovial, kinetic style about him. And as he steps back into the spotlight, he's lined up a major comeback gig: stepping in for the recently departed Miss Kitty. Last week, the station announced Jerry's return as their new weekday afternoon host.

With Jamaican radio presently crowded with dynamic personalities all jockeying for the top spot in the ratings, Jerry says he's more than up to the challenge. As for his plans for his weekday listeners, he has a few tricks up his sleeve, vowing to bring a sense of palpable freshness to the airwaves.

"Substance and greater entertainment," he promises during an interview that aired Friday night on Entertainment Report. " Whatever it is, we're bringing the Jerry D experience on radio. We're pulling it out now. I have to make you do something, I have to make you act. You have to have some level of confidence in order to do what you want to do."

Even as he sets his sights on being crowned king of Jamaican afternoon radio, he has much love for his predecessor, Miss Kitty. "From it's radio, I am live. Respect to what she has done. Respect to Miss Kitty, but this is the Vibesmaster, Jerry D."

Posted by TALLAWAH Magazine (tallawahmagazine@gmail.com) at 8:56 am