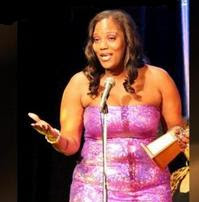 IN IT TO WIN IT: Harris accepting at the recent Actor Boy Awards.

With multiple awards and a terrific succession of hit plays, Dahlia Harris remains one of Jamaica's smartest stage actresses and hottest playwrights. This month sees the arrival of her newest effort, Thicker Than Water, a dramatic blend of workplace drama and family angst.

The story follows Kimberly whose on-the-job promotion triggers conflict and confrontation in the office. Throw into the mix a mentor who thinks Kimberly has reached too far too quickly, a best friend who is now insubordinate, and a young co-worker who has her sights set on moving on up. As it turns out, getting the job isn't half as tough as staying at the top. And when secrets threaten to surface, family is all she has to pull her through.

Harris, who penned the script and is making a return to the director's chair, co-stars with a talented all-female troupe that includes Suzette Barrett (fresh from her Thespy and Actor Boy triumphs), Janella Precius (better known as a TV broadcaster), Shawna-Kae Burns (In the Red and Brown Water), and the Jamaica Junior Theatre's Monique Scott. Suzanne Beadle alternates. Poised to stir emotion and provoke thought, Thicker Than Water debuts at the Stages Theatreplex in New Kingston on April 26.

>> Also in theatres: David Tulloch and the gang explore relationship arcs in Paternal Instinct; Oliver Samuels and crew bring the funny in Embassy Saga; and the School of Drama goes the fantasy route with Cinderella Chronicles.