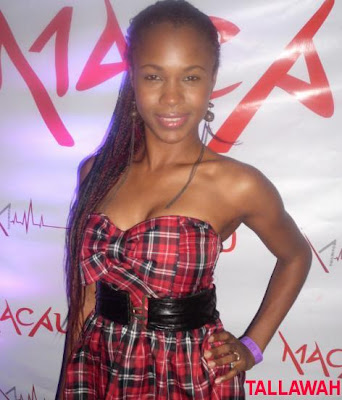 SOLO MOMENT: "I'm steadfast on the path of creating a place for myself in the biz."

She may be tiny in stature, but Stephanie Wallace's passion for the music world is so outsize that she comes dangerously close to redefining the ubiquitous term petite dynamo. With a penchant for soothing melodies and sweetly clever lyrics, the ace singer-songwriter will be the first to tell you that though her career has been evolving in gradual stages within the last five years, she finds joy in the priceless lessons she's gleaning along the way.

"The process has been slow and steady, but I don't mind because I'm learning a lot, and I know all this knowledge will serve me on the platform that I wish to put myself," she tells TALLAWAH, ahead of taking the stage at Macau's Live & Revive on Monday night. "All of this knowledge will come in handy. It's been a slow process, yes, but a lot has been happening at the same time."

By "a lot" she is referring to the countless bankable hours she spends weekly laying down backing vocals at the studio -- and penning tunes for herself, other recording artists, and the US-based entity Rebel America, to which she's been signed since 2010. "I'm steadfast on the path of creating a place for myself in the local and international industry," says the 27-year-old, who recently saw two of her tunes making the cut for shows on MTV and Lifetime. A huge accomplishment, by any standard, for a Caribbean-based talent.

And she's not done yet. In addition to recently dropping her first-ever EP, Real Woman (a winning blend of reggae, R&B and soul), she's established the independent label, Havatio, along with her musician hubby Stephen. It's a move Stephanie describes as one of the wisest career-related decisions she's ever made.

"Having an independent label is kinda the way to go these days in terms of retaining most of your income, and just securing financial returns out of this business," she remarks. "It ensures that we are in control, and we have creative control over everything. We are the decision-makers and we have the vision and no outside entity can come in and change that." Indeed.

But what's it like exactly to be married to a fellow melody maker? Stephanie lets out a hearty laugh. "It's awesome. We make music everyday," she confesses, giggling. "It's very good. It enhances our relationship really. It is such a lovely thing, and I find that it brings us closer as best friends."

Unsurprisingly, Stephanie has numerous future accomplishment to tick off her list. "Right now I'm working on the album, and hoping to do some promotional stuff, as well as some touring for the latter part of this year going into next year," explains the songbird, who singles out Alaine as a fellow creative soul she'd love to do some songwriting with. "I definitely want to have an impact among the world's international artists because I'm a Jamaican artist, but I don't just do Jamaican music. I know I have what it takes, and in all honesty, over the course of the past 5 years I've seen a big growth in myself musically and in me as a person."

Outside the studio, what brings a smile to Stephanie's face? "I really enjoy being a mother," gushes the proud mom of two (an 8-year-old and a two-year-old). "They keep me busy. And in between that I also try to find time to hang out with friends. I'm not a party person, but I love to have a good time."