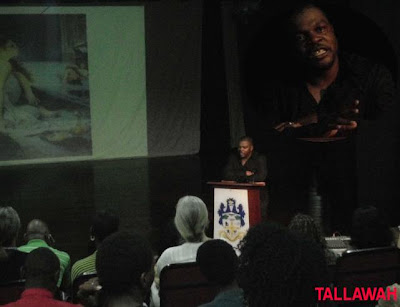 ON POINT: Wiley engages the audience during his presentation. Below: with Jampro's Kim-Marie Spence.

"I just hope to continue my exploration of going around the world, scouting for models, and to just capture a sense of what it feels like to be in Jamaica today," explains acclaimed New York-based artist Kehinde Wiley, following a JAMPRO-organised Artist Talk at the Edna Manley College on Tuesday. For a little over 25 minutes, the 36-year-old Yale-educated art maverick gave an articulate and engaging presentation, dubbed "Ten Years of Painting," to a nearly full house inside the college's main dance studio.

Zoning in on the purpose for his trip to the island, Wiley says he intends to create a series of works (which will be displayed internationally in the fall) that showcase not only the natural appeal of the country but also the essence of our Afro-Caribbean identity.

A documentary film crew will accompany the artist and his team as he traverses the length and breadth of Jamaica for an unspecified duration. "I like the fact that I haven't been here before," he tells TALLAWAH. "But I want to throw myself into something unknown. I really want to create a solid body of work that comes out of this country."

The resulting oeuvre will no doubt engage with and spark open dialogue about Wiley's trademark themes of power, identity politics, gender, and race, to cite just a few. Over the course of a successful career that has taken him to all four corners of the earth, Wiley has crafted stunning, sometimes provocative, but always unforgettable images depicting varied subjects (predominantly Black males) from Harlem to Mumbai, which have been highlighted in venerable publications from Essence to Vanity Fair's groundbreaking 2006 Art Issue. 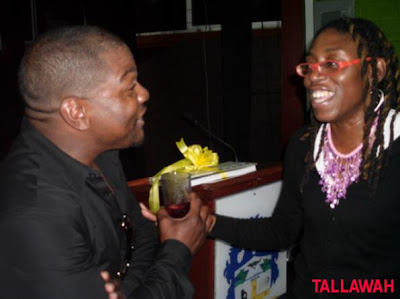 To say the least, an investigation of hip hop-era masculinity and a profound exploration of the Black experience continue to heavily inform his work. "I have captured a lot of folks in my work over the years, as I depict things that provoke and delight me," say Wiley, who was brought up in Los Angeles. "But I think with art it's truly about looking in the mirror...There's something about the human figure that draws us all in."

TALLAWAH: What is life like in Harlem these days?
Wiley: Harlem is a work-in-progress. The neighbourhood has been evolving. Now it's become a lot more gentrified. You notice that the property rates are going up, and it's good and bad for the neighbourhood. New museums and very pricey restaurants.

Outside of work, what are your plans while here in Jamaica?
I want to do some fishing. Probably at the Rio Grande or in the ocean. (Laughs).

Posted by TALLAWAH Magazine (tallawahmagazine@gmail.com) at 1:10 am