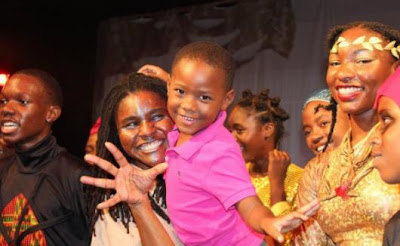 PLAY ON: "The energy connects with the audience of children," notes McDonald.

Brainy and business-savvy, Sabrena McDonald is in that rarefied company of actresses whose obvious book smarts fail to overshadow the fact that they know how to cut loose and have a good time. "I love a good lyme," she confesses to TALLAWAH. "A house-party kind of thing. Being around great friends and good vibes. I looooove going to the beach; it soothes me. And I do enjoy going to the movies. I'm a movie addict; you can find me at Carib at least once a week."

In the same breath, McDonald, who graduated with an MBA (Distinction) from the Mona School of Business three years ago, is quick to add that these days she fully intends to rekindle her love of wide reading, a passion she temporarily put aside following the completion of the Master's programme. Completely understandable. "My reading appetite kind of died after that," she quips, laughing. "but I feel like I am ready to rekindle it now."

The fun-loving persona aside, the 30-something star has long made a name for herself as a serious and intelligent actress in Jamaican theatre, with compelling roles in such hits as 2006's original Not About Eve (alongside Dorothy Cunningham and Karen Harriott) and more recently God's Way, with Dahlia Harris and Ainsley Whyte. She's also flown solo with 2010's smart, very funny one-woman show, Slim Actress. 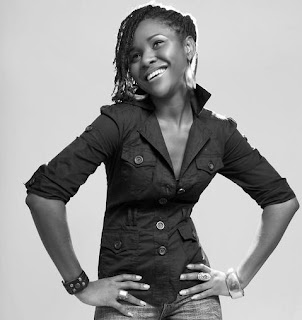 Still, her most passionate work has manifested in productions by the Independent Actors Movement (IAM), which she co-founded some 10 years ago. "I am so proud of all we've been able to accomplish so far," she tells me. "This is a rebirth year for us, so we are working on a schedule of activities to roll out sometime later this year."

For the time being, McDonald's focus is primarily riveted on Anancy Chaptaz: Winners' Circle (the third in the award-winning, kid-friendly series), slated to premier at the Dennis Scott Theatre, Edna Manley College, at the end of next month. (See poster at right). "What makes this series a success so far is the combination of elements that we bring to the product -- music, storytelling, and a whole lot of fun for the entire family," explains McDonald, who plays the ancestral spirit, Tella.

"Children in the cast [are] in love with the story, characters and the music and put their heart and spirit in the performances. That energy connects with the audience of children and children living in adult bodies."

That's not the only thing the St. Jago High and CARIMAC alumna is looking forward to as she continues to evolve into a wiser, stronger and more fiercely independent version of her talented self. "I'm also excited about my radio show, Sleepover with Sabrena, expanding on RJR," says the entrepreneur behind Round of Applause Productions, a booming marketing/advertising firm. "It's been really going well, but I want to take it to another level this year." TUNE IN: Catch Sleepover with Sabrena every Tuesday on RJR from midnight to 5:00 am.