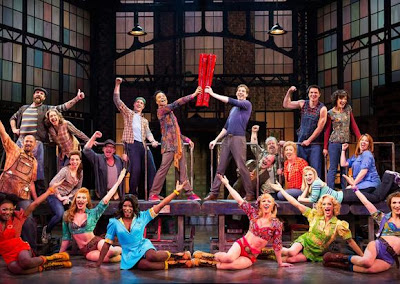 RAZZLE DAZZLE: Cast members in a scene from Kinky Boots.

Among the plays, the acclaimed revival of Clifford Odets’ Golden Boy proved strong with 8 nods. Two-time Oscar winner Tom Hanks is gunning for EGOT territory with a best actor in a play nod in his first Broadway role in Lucky Guy. (Its late author Nora Ephron was also nominated for the journalism bio). Meanwhile, Christopher Durang’s Vanya and Sonia and Masha and Spike picked up 6 nods, though star Sigourney Weaver’s comic turn was overlooked.

Presented by the American Theatre Wing, the Tonys will be handed out during a live CBS broadcast on June 9 at 8pm. To see the complete list of nominations, visit tonyawards.com.