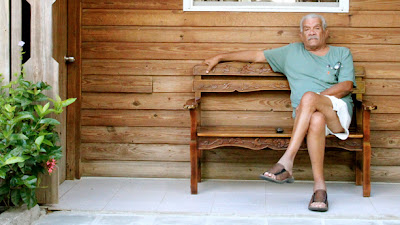 IN PROFILE: Mr. Walcott is ready for his close-up.

Poetry Is An Island is a compelling and intimate docu-film about Derek Walcott, the poet, novelist, Nobel Laureate, and son of the Caribbean. As filmed by award-winning auteur Ida Does, the project seeks to enlighten viewers about the man behind the legend, as well as the mystery and mystique that surrounds him.

As such, we are transported to Walcott's home in Castries, St. Lucia, as Does and her crew spend time speaking with childhood friends, family members, and people he has worked closely with. "All were so very willing to share precious memories and experiences in front of the camera," Does says. "It almost seemed as if they had been waiting to tell the story."

Just as it how it is poised to captivate audiences, the journey took the film crew to unlikely places, with Walcott himself, during their two visits, giving them inspiration and food-for-thought when it comes to excellence in art and daily Caribbean life. As the film will also reveal, even as a senior citizen, at the age of 83, Walcott stays busy writing, giving lectures, dabbling in visual art, and defending unspoiled Caribbean landscapes.

To learn more about Poetry Is An Island, and how you can assist with the postproduction costs, visit walcottfilm.com.