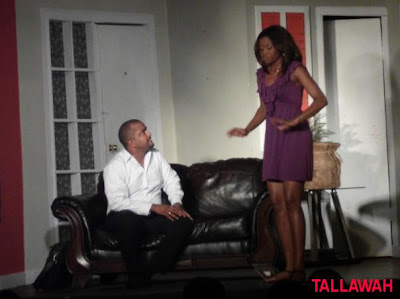 BABY, IT'S YOU: Tulloch and Williams are an unwed couple trying to make it work.

On second viewing, Paternal Instinct still comes across as a thought-provoking, albeit entertaining, meditation on family, fatherhood and relationship arcs. But I must admit that, for me, the show's first cast (Orrin Scott-Stewart, Stephanie Hazle and Keisha Patterson) managed to pull the audience deeper into the story with their rapport and energetic, intriguing character portrayals, Patterson being a memorable standout.

But that's not to say that this second cast comes up short on the requisite chemistry to make the whole thing come alive. They do have spark, but it's woefully inconsistent, particularly in the play's early stages. Things improve remarkably as the show progresses, however, perhaps on account of the performers getting more comfortably settled in the skin of their characters.

It warrants a mention that this production marks the long-awaited comeback performance of the multi-hyphenate David Tulloch (writer, director, producer, leading man). To say the least, his return to the boards of the Pantry Playhouse (a pretty solid account of his acting chops) reminds us that he is indeed worthy of the lofty title of theatre's golden boy.

You don't have to be conversant with the finer details of the plot to know that this tear-jerker of a production about a bright young lawyer (Tulloch), his posh weather-girl sweetheart (Lisa Williams as Alicia Smith) and colourful babymama (Marsha-Ann Hay as Martina Rodriguez) speaks powerfully to its core themes and offers an emotional probing of the father-daughter relationship.

For the record, Tulloch reveals a hidden talent for the whole fatherhood thing, sharing a believable rapport with his young costar Leanne Bailey, who in her own way contributes to several of the play's more lighthearted moments.

Compared with his alternate, Orrin Scott-Stewart, Tulloch delivers a more controlled and dignified portrayal of Mark Frazier. So dignified that during one particular couch scene (an argument with Williams, I believe), he ran the risk of appearing downright meek and mousy. And speaking of Williams, I particularly enjoyed the slightly self-conscious preening she applied to her character without overselling it, opposite the more free-wheeling Marsha-Ann Hay.

For me, it's always been a highlight of Tulloch's work, and certainly one of Paternal Instinct's secret weapons: balancing intensely dramatic moments with clever humour, as if to remind us that one of theatre's main functions (especially in comedy-drama) is to defuse bombs that in real life explode and destroy. Tyrone's Verdict: B

>> Read more: Take a look at the original review of Paternal Instinct