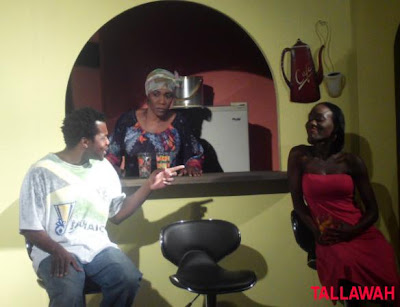 IN THE HOUSE: Titus, Reid and Elliston spend bonding time.

Jamaican family dynamics get no realer than those depicted in Embassy Saga, a lighthearted, occasionally moving, and commendably acted comedy about the ties that bind, Christian hypocrisy, and deep, long-buried secrets. Oliver Samuels heads the cast as Ezekiel Farrington, a proud mechanic with over 30 years to his credit toiling in the trenches for the American government in places like Guantanamo Bay.

Now retired, he's back home in Jamaica but given the harsh socio-political and economic climate, he's itching to migrate to the States with his household from the well-to-do Embassy Heights to the States.

Trouble is, not everyone is sold on the idea of leaving home for the sure uncertainty abroad, especially his overzealous Christian wife (Audrey Reid), who is frequently bumping heads with flighty daughter Rachel (Lakeisha Elliston) but dotes on son Zacky (Dennis Titus), who has a crippling phobia of reptiles.

For the most part, it's an entertaining four-hander with Samuels giving a loud, ranting, hilariously aggressive performance as the "colourful" dad, who probably spends way too much time bickering with his woman over their sexless marriage and his kids over their myriad shortcomings. It grows tedious after a while.

As for the script, the punchlines keep on rolling, as Samuels knows fully well what will delight and draw in his loyal band of theatregoers. Director Douglas Prout, meanwhile, allows the action to play out at a deliberate pace, eliciting decent, appealing performances from his cast, which shares a rather engaging chemistry.

But by far Embassy Saga's most telling asset is the central mix of bonafide, under-one-roof familial ties that are nothing if not convincing and feel utterly Jamaican, as it explores issues of patriotism and family love and, as one character puts it, "the potholes and pitfalls along life's journey." Tyrone's Verdict: B-

>> Read more: Audrey Reid on her craft and ever-expanding career

Posted by TALLAWAH Magazine (tallawahmagazine@gmail.com) at 9:23 am