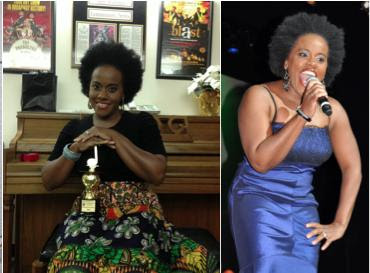 WORKING GIRL: The singer basks in the spotlight. Below: with hubby, Andre Morris.

Ace songbird Etana capped off a busy weekend by hosting the 32nd IRAWMA International Reggae and World Music Awards in Coral Springs, Florida on Saturday. The songstress not only played host at the annual ceremony, but also made her way centrestage to give a rendition of her most recent single, "Reggae," to the delight of the packed auditorium, before waltzing away with the award for Best Female Vocalist, beating the likes of Queen Ifrica, Allison Hinds, Patrice Roberts, Nkulee Dube and Marcia Griffiths.

"We are so proud of Etana and to be a part of her journey," says Patricia Chin, co-founder of VP Records, which released Etana's third solo album, Better Tomorrow, earlier this year. "Her poise and sheer determination always shine through. She is one of the most talented singer-songwriters of her time, and we are glad that the community and the IRAWMA organization recognize her contributions to the genre."

Even as she celebrates the recent release of the visual for "Reggae" (directed by Kerrin McLean), Etana is gearing up to lend some star power and motivation to the International Women’s Forum Cornerstone Conference, set for the Montego Bay Convention Centre in St. James on May 31. Etana will speak on a panel entitled "Jamaican Women In Music - Raising The Pitch And Lifting The ," alongside Rita Marley, Marcia Griffiths, and Olivia 'Babsy' Grange.