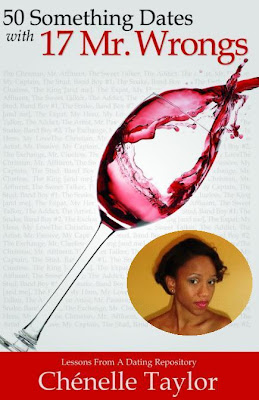 TELL ALL: Taylor comes clean about searching for love.

Unfiltered, unapologetic, and utterly candid, Chénelle Taylor's 50 Something Dates with 17 Mr. Wrongs: Lessons from a Dating Repository chronicles the author’s real-life on-the-hunt-for-love experiences. It is an eye-opening, laugh-out-loud glimpse into the dating world of the single, highly-educated, career woman. Taylor will launch the memoir (self-published and previously released digitally) at Bookophilia on Thursday of this week, and print copies will be available for the first time at the launch.

Having attained some expertise on matters of the heart, Taylor is a writer who has identified her dating mishaps and is now sharing what she’s learned from such experiences. "I hope everyone will read [the book]; men and women alike, but my target is primarily like-minded women who can relate to my experiences, as well as the men who contribute to such experiences," explains Taylor, who adds that the book is specially dedicated to the hopeless romantics who've been burned, broken, and rejected. "I also want all of the men in the book to read the book. Some already have."

As she tells it, the self-publishing road hasn't been easy for Taylor, but it's been worth it. ”It took a lot of effort to self-publish this book, and I did it on my own after watching webinars and reading articles," says the Ph.D candidate. “It certainly hasn't been easy. The consistent promotion that is needed for a self-published book to have a viable chance at success is not something I'm used to. Selling myself is nowhere on my list of favourite things to do, nor am I very good at it. However, the feedback has been mostly positive, and that has made it worth it.”

Posted by TALLAWAH Magazine (tallawahmagazine@gmail.com) at 11:01 am

Email ThisBlogThis!Share to TwitterShare to FacebookShare to Pinterest
Labels: Book Launch, Chenelle Taylor, Ones To Watch