MAN OF THE MOMENT: As Rising Stars repositions him front and centre, Anthony Miller has our full attention 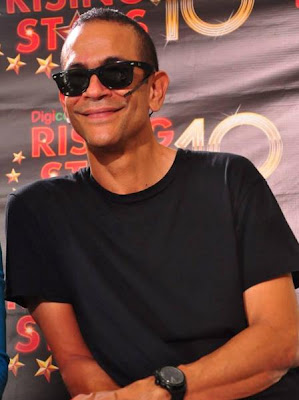 WHY IS THIS MAN SMILING?: "I am just here to tell it like it is."

Jamaican pop culture watchers do love a good comeback story. So it's no surprise that Anthony "Killer" Miller's return to the judging panel of Digicel Rising Stars has so intensely captured the public's attention. The underwhelming ratings the talent show endured over the course of the last few seasons seriously threatened the whole idea that the TV J-hosted reality series could remain a healthy and viable product, especially in these challenging times.

"All it took was an admission from Digicel that the show was not going well, and they were inviting me back in a bid to restore what they thought was missing," Miller is quoted as saying in a recent Splash interview. "Then, of course, there was the call from TV J also asking me to consider. When Gary Allen calls you and puts this on the table, you just have to say yes."

At the beginning of the series a decade ago, the veteran journalist and producer (he still oversees the long-running Entertainment Report) joined Nadine Sutherland and A.J. Brown (later replaced by Clyde McKenzie) as the judges, who week after week dished out critiques and "pearls of wisdom" to the stardom hopefuls. For the most part, the trio fared well with viewers, who dug the mix of personalities. A few years later, however, as the producers revamped the show and gave it a fresh format, Miller made his exit along with Sutherland and McKenzie.

As his hordes of admirers will tell you, Miller, who had quickly earned comparisons to American Idol's Simon Cowell, was the show's best asset. A brilliant, sharp-witted proponent of tough love, he was known (and still is, apparently) for delivering unsweetened, unbiased assessments of the budding singers and deejays. While there are those who squirmed at his steely approach, many viewers welcomed his mix of tell-it-like-it-is candour and acerbic wit.

For Miller, it's simply about keeping it real and being himself. "I have never watched American Idol and therefore the comparisons with Simon Cowell could not be further from the truth," he has said in response. "I am just here to tell it like it is."

Well, that's precisely why folks are happy he's returned to the show. And not a moment too soon, as they are about to embark on the 10th anniversary season. From street corners to social media, folks say their interest in Rising Stars has been renewed thanks to Miller's long-anticipated return. Of course, a huge portion of that number will be tuning in expressly to witness how he "analyzes" the new crop of contestants. For me, it's must-see TV.