ON THE JOB: Explosive Thicker Than Water takes a hard look at women and work, friends and foes 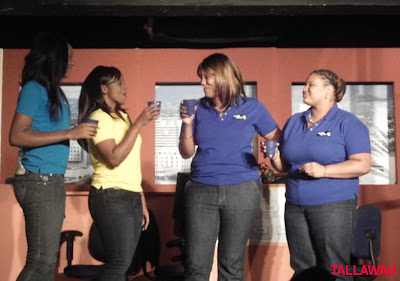 LET'S HEAR IT FOR THE GIRLS: Smiling cast members toast to success. Below: Smith and Burns take centrestage.

Thicker Than Water, the newest stage drama from the pen of acclaimed playwright-actress-director-producer (etc.) Dahlia Harris is certainly worth adding to your entertainment schedule. It's a flawed but memorable feast, and way more enjoyable than would appear from a basic plot description.

In short, it's about a highly driven career woman named Kimberly Thorpe (Harris), whose rapid ascension in the workplace exposes hypocrisy, pent-up bitterness and ruthless ambition, thanks to her awful co-workers, who become her subordinates in the wake of her promotion to the corner office and head of the company's human resources department.

Though this new work is a solid addition to the Dahlia Harris canon, Judgement remains her best work to date. Still, Thicker Than Water is stirringly told and entertaining and, thankfully, steers clear of sentimentality. To wit, it's full of energy, intensity, fiery dialogue, believable human relationship dynamics, and passionate performances. 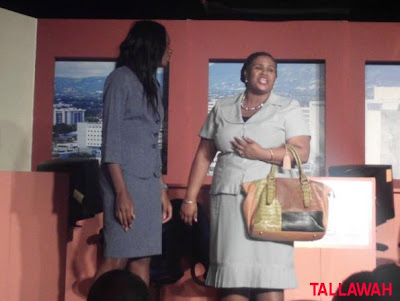 Harris excels as a character whose from-nothing-to-something rise on the job balances sharp-eyed compassion with steely resolve, but whose skeletons could bring about her downfall. Barrett, so brilliant in last year's Pularchie, delivers once again, but it's way more volume than nuance. Her substantial chemistry with Harris enlivens the production.

Burns is riveting, nearly pitch-perfect, confirming her broadening acting talents. Smith and Precius muster adequate conviction for their parts, but their individual ranges as actresses are rather limited.

Thicker Than Water is an intense show that plays out with a few minor twists thrown into the mix. Many of its faults are easy to overlook, and the ending leaves room for a sequel. Humour is interspersed throughout, but there are also key issues (class, revenge, attitude to the past, women in the corporate world) handled seriously. In fact, it's as much a family saga as it is a workplace drama, posing sobering questions about what's truly important as we traverse life's unpredictable terrain.

The set design (depicting office cubicles and corner office) is chic and comes to life under the vivid lighting.

For those who relish an intriguing theatrical package, and who know all too well the struggles of being a go-getter determined to reach the top of the success ladder, Thicker Than Water will not disappoint. Tyrone's Verdict: B