OSCAR BUZZ: Alongside an A-list cast, Oprah Winfrey earns raves for The Butler 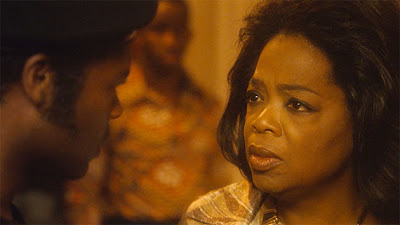 SCENE WORK: Winfrey and a male costar in Lee Daniels' The Butler.

Is Oprah Winfrey destined to add an acting Academy Award to her ever-expanding cache of honours and accolades?

In the upcoming film The Butler (directed by Precious' Lee Daniels), the talk-show maven and part-time actress gives a performance so outstanding that critics and films buffs who've already seen the final cut of the period drama, say Winfrey's work is pure dynamite and simply award-worthy. “Oprah is fantastic,” notes one BZ spy. “Her performance is truly Oscar worthy.”

The film is based on the true story of the late Eugene Allen (Whitaker), the White House head butler who served eight presidents between 1952 and 1986. Winfrey plays his supportive, non-nonsense wife. The TV queen, who has not acted in a theatrical film since 1988's Beloved, had guests in New York at a very special, early screening of the film raving about her performance.

The Butler will be released in October, timed for awards season. Naturally.

Winfrey was nominated for a best-supporting Oscar for her first acting role, in The Color Purple in 1985. The statuette went to Anjelica Huston in Prizzi's Honor. But, who knows, come 2014 Winfrey could well emerge as the one to beat.