SKY IS THE LIMIT: Olympian Shelly-Ann Fraser-Pryce vows to change young lives through her new foundation 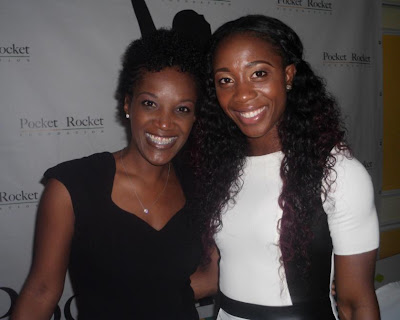 SHOW OF SUPPORT: Fraser-Pryce (right) and Paula Pinnock-MacLeod. Below, Fraser-Pryce addresses the gathering.

In the company of corporate colleagues, relatives, and well-wishers, Olympic champion Shelly-Ann Fraser-Pryce officially launched the Pocket Rocket Foundation (visit pocketrocketfoundation.com) at the Terra Nova All Suite Hotel in Kingston on Tuesday morning.

As chaired by Fraser-Pryce herself, the not-for-profit entity promises to see to the development of emerging young athletes at the secondary-school level by providing them with scholarships to cover tuition and other academic-related expenses. (To learn more, contact info@pocketrocketfoundation.com).

It's a wonderful and welcome move by the 26-year-old star athlete at a time when finances for education are in rapidly dwindling supply. "I got the support I needed, and it made the difference. I wouldn't be who and where I am today without it," explains the superstar sprinter. "The scholarships we [are offering] are investments in the development of sports in Jamaica." 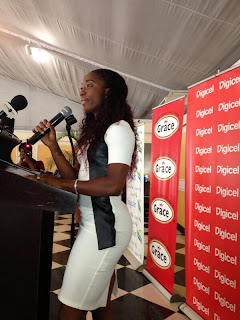 Unsurprisingly, the pint-sized phenom got ample support at the launch from admirers in the croporate world, locally and internationally. Sponsors Nike pledged a contribution of US$10,000. Grace Kennedy (represented by Don Wehby) handed over a cheque valued at $1 million, while Digicel made a similar gesture. "Shelly-Ann has been an extraordinary ambassador for Digicel. [Signing her] was one of the best moves we ever made," noted Tahnida Nunes, sponsorship manager.

The foundation has already announced that it intends to partner with ISSA to host two PR seminars annually for student athletes representing their schools locally and internationally. In addition to having Fraser-Pryce as Chairman, the foundation's board is comprised of Paula Pinnock-MacLeod, Jefferey Gordon, Colleen Montague, Raphael Walker, Donovan Walker, and Bruce James as President. "Shelly-Ann is someone who doesn't have to give back but has chosen to give back," says James. "She wants to give back for what she has received."