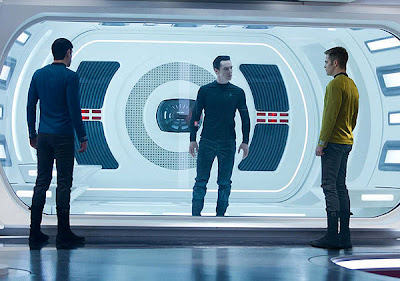 TO BOLDLY GO: Quinto, Cumberbatch, and Pine star in Abrams' addition to the sci-fi franchise.

Visually spectacular and teeming with exhilarating thrills, Star Trek: Into Darkness is a worthy addition to the estimable Star Trek canon. But amidst all the bombast and mayhem that comes with such epic box-office juggernauts beats an emotional core, set against moments of intimate poignancy and a touching look at the power of friendship.

It's strongly acted, too, and reels viewers in as the Enterprise zips and zooms through outer space. Speaking of the Enterprise, once again Trekkies and new converts are taken aboard the legendary mothership as it embarks on yet another adventure. Helmed by Captain James Kirk (Chris Pine), the crew, upon returning to Earth finds an unstoppable force of nature from within their unit has destroyed the fleet and everything it stands for, leaving the world in a state of crisis.

With a rather personal score to settle, Kirk leads a manhunt to an unknown war-zone world to capture John Harrison (Benedict Cumberbatch), a one-man weapon of mass destruction. As the crew is propelled into an epic battle of life and death, love is challenged, friendships torn apart, and great sacrifices made.

Director J.J. Abrams manages to whittle the running time down to a tidy two hours and three minutes, while still packing in enough fun and visceral action sequences to satisfy audiences. And that's saying something for the film itself, which enjoys solid pacing and emotional heft balanced against non-stop thrills and twisty delights.

Standing out among his peers, Cumberbatch gives a sensational, riveting performance, which comes off as a chilling, convincing portrait of a villain with next to nothing to lose. As the rigid Spock, Zachary Quinto is superb while. Saldana holds her own as the supportive Uhura. Among the numerous cameos, Alice Eve puts in an appearance as the sly Carol Marcus, while Anton Yelchin reprises his small gadgetier role.

Overall, this latest instalment of Star Trek is an effortless blockbuster sure to captivate viewer interest, even as it awakens nostalgia and age-old questions about what we truly know about the great beyond. Tyrone's Verdict: B+