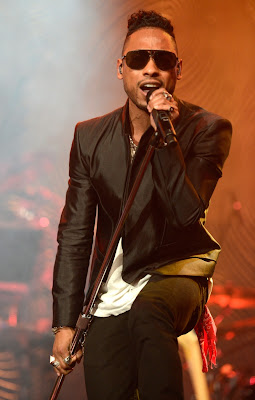 IN TUNE: The crooner onstage at the Grammys in February.

It will mark his first time performing for fans in our little island in the sun, but rest assured he will make it a memorable one, if his impressive track record as a live performer is anything to go by.

Summerfest Productions has announced that breakout R&B-pop star Miguel is among the international acts set to hit the main-stage at Reggae Sumfest this summer. The Grammy-winning singer-songwriter is perhaps best known for the sultry, chart-topping smash "Adorn", off his widely praised sophomore set, Kaleidoscope Dream, which went all the way to number one on Billboard's R&B/Hip-Hop Chart.
The artiste, who has been hailed by fans and critics alike as the modern-day Prince, often blends rich sounds of soft-rock, pop and funk to produce colourful, musical offerings.

Miguel joins a star-packed list of internationally acclaimed musicians (Destiny’s Child, Rihanna, R. Kelly, Kanye West, Lionel Richie, Usher, Chris Brown) who have all graced the Reggae Sumfest stage. He is scheduled to perform on Saturday, July 27, the final night of the festival, alongside Chronixx, one of the most exciting reggae ambassadors du jour.

Posted by TALLAWAH Magazine (tallawahmagazine@gmail.com) at 11:41 am