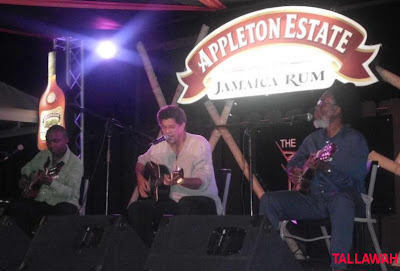 Though they went by the name of the Calabash Acoustic Ensemble for quite some time, Jakoostic's mystical musical performances remain as captivating as ever. Last Monday night, the veteran trio of guitarists (Wayne Armond, Seretse Small, and David Waugh) stayed true to their mix of quality sounds and substance, as they brought the house at the Macau Lounge to its feet with a spellbinding set. They were the latest headliners of Live & Revive.

Repertoire-wise, the seven-year-old band performs acoustic versions of classic Jamaican songs. And there were plenty of those in the offering, with an absorbing take on Beres Hammond's "Putting Up Resistance" opening the show. Armond's whiskey-tinged vocals transformed "The Book of Rules" into a thrilling slice of rootsy reggae. Livelier still was the uptempo jam "Sweet and Dandy" followed by a keenly rendered take on Jacob Miller's "Pick Myself Up".

Proving their wide-ranging tastes, Jakoostic also did folk tunes, providing a spare yet vocally robust take on songs like "Sammy Dead Oh," raising the decibel level to near fever-pitch, further heightened on "The Harder They Come" and a piece of Bob Marley's "Redemption Song."

Live & Revive concludes its inaugural season next Monday with a host of performers joining forces to bring the 10-week run to a fantastic close.