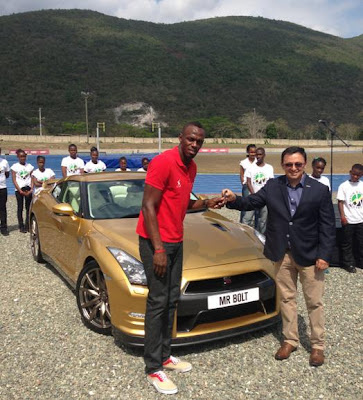 SLEEK MODEL: The sprinter accepts the keys from José Roman, managing director of Nissan Latin America and the Caribbean, at the handover.

Jamaica's golden boy Usain Bolt was presented with his very own version of the uniquely original, sharp and sleek Nissan Gold GT-R supercar during a presentation at the UWI/Usain Bolt track on Sunday. Benificiaries of the Usain Bolt Foundation were also in attendance.

Last December, a special edition of the flagship supercar fetched nearly double the list price at auction in aid of the charitable organisation. The car, complete with unique gold paint job and interior gold plaque bearing the 100m star’s autograph, fetched an overall total of US$193,191. The auction saw fierce competition from bidders around the globe when it was launched on eBay Motors on November 22. The car eventually went to an anonymous Australian bidder.

“My partnership with Nissan greatly benefits the work of my foundation," said Bolt. "[The] donation will help many kids get access to better facilities, play areas and educational materials in Jamaica.”

The Olympic legend has been working with the Nissan company since October 2012, when he was appointed the Japanese carmaker’s honorary “Director of Excitement” and brand spokesman for the company’s “What if _” global brand campaign.