FILM OF THE WEEK: Intriguing Now You See Me delivers a mixed bag of 'magic' tricks 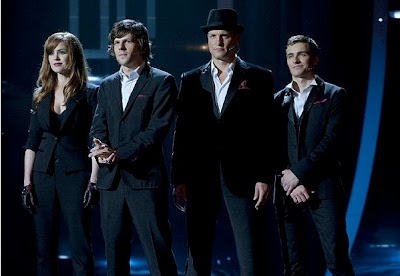 FANTASTIC FOUR: These magicians earn raves (and notoriety) for their dazzling feats.

What is magic? That's a simple yet utterly profound question posed via voice-over narration mid-way Now You See Me. The answer? Deception designed to delight and entertain.

Indeed, that's a fairly on-the-money description of what actually plays out in this fast-paced and entertaining flick that follows a band of magicians (Jesse Eisenberg, Woody Harrelson, Dave Franco and Isla Fisher) who call themselves The Four Horsemen. Brought together by a mysterious stranger, the quartet embarks on an ostentatious series of bank-robbing heists performed as magic tricks before a live and rapt audience.

Though they have absolutely no idea who they're working for, the team embarks on this thrilling adventure (car chases, amazing sleights of hand) even as they're being pursued by a relentless horde of cops hot on their trail.

Director Lou Letterier (Clash of the Titans) ratchets up the thrills and suspense, but the film, which seeks to explore that tricky line between "magic trick" and "criminal act," loses its lustre in the final act, making for an unsatisfactory conclusion.

Shame, given the pedigree of its cast, which includes such veteran supporting players as Sir Michael Caine, Morgan Freeman (as a shadowy figure bent on exposing the magician's secrets) and Mark Ruffalo, as the lead FBI agent doggedly following their every move.

In short, Now You See Me runs out of 'magic' in the end, but what it does deliver up to that point is nothing short of entertaining and intriguing. Tyrone's Verdict: B