WOMAN OF HER WORD: Cherry Natural chants her way from 'Earth Woman' to 'Intellectual Bad Gal' 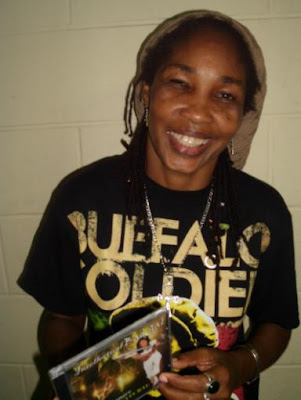 REBEL SPIRIT: The poet on her bold new album and being a perfectionist.

The dub poetry movement in Jamaica is in the doldrums these days, according to Cherry Natural, someone who should know, given her standing as something of a living legend. "It could have more energy," she tells TALLAWAH. "To be honest, a lot of people don't pay it any mind, and it surprises me when people who hear my work tell me that they didn't know dub poetry could be so powerful."

With her just-released CD, Intellectual Bad Gal, recorded over the course of three months in a little studio in Kitson Town and launched on Tuesday at the Poetry Society's end-of-month fellowship at the Edna Manley College, Cherry (nee Marcia Wedderburn) feels she has a bonafide game-changer on her hands. "I feel very good about it, but I'm a perfectionist, so I've been saying the next one is going to top this one," she says of the 17-track disc laced with her fiery brand of lyrical rebel chants and clever, quasi-revolutionary rhetoric set to riddims.

As for the story behind the album's curious title, Cherry says it's about stripping the term "intellect" of its elitist connotations and claiming it for herself and others like her. Further breaking it down, BAD, she reveals, is her very own acronym for "brave and different", with gal as a term of endearment.

For the record, Intellectual Bad Gal is Cherry Natural's sophomore album, after 2000's Earth Woman, which helped establish her as a voice of not only rhyme and reason but serious passion and power. Also a trained martial-arts instructor with black-belt credentials, Cherry says she has high hopes for the record. "I personally believe everything has a timing," she observes, "and maybe this is the time for me to go to that next level because I've been getting a lot of love from people regarding the album."

Posted by TALLAWAH Magazine (tallawahmagazine@gmail.com) at 6:42 am