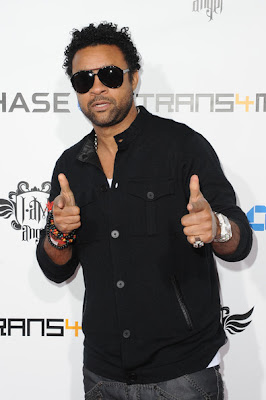 HE IS LEGEND: The Jamaican megastar at the I.Am.Angel Foundation concert in California in February. Below, with Ne-Yo on-stage at Jamaica Jazz & Blues 2012.

Madonna, Prince and Grace Jones, to name only a few creative powerhouses of that class and calibre, have perfected the art of self-reinvention by relying heavily on the drive, competitive gleam and passion that got them through the door in the first place. Count among the Jamaican students of that school of thought Orville "Shaggy" Burrell, whose forthcoming 12th studio album, Sly & Robbie Presents Shaggy: Out of Many, One Music (due out September 24), is set to confirm that he's still highly relevant -- and bombastic -- after 20-plus years in the game.

On Thursday afternoon, the diamond-selling 44-year-old was joined by fellow Grammy winner Ne-Yo (one of numerous collaborators on the new album) at Truck Stop on West King's House Road to film the video for the record's hypnotic single. During a rare break on-set, Shaggy chatted candidly with TALLAWAH about creative and personal growth, fatherhood and family, why acting isn't his thing, and being excited about making music all over again.

TALLAWAH: You're back in the spotlight with fresh singles and a soon-to-drop 14-track album. How much fun was it to put together this latest disc, your 12th?
Shaggy: It's a project I'm excited about because, first of all, it's with Sly & Robbie, and it was born from an energy of just being on tour and we decided that we're gonna do an album together. This is the first album I've done that's all reggae and lover's rock. There is no dancehall on it.

Don't tell me you're divorcing dancehall.
Not at all. My next album will be straight dancehall. Dave Kelly and I have been talking about working on a Shaggy dancehall album. He and I worked on "Angel" and a couple of other songs on Hot Shot, and so we're thinking of doing a dancehall-fusion kind of album. It would be me, him and Sting International. So that should be interesting for next year.

Your guestbook for Out of Many is pretty impressive, with the likes of Beres Hammond, Ne-Yo, Konshens, Morgan Heritage and Tessanne, et al, putting in appearances. How do you usually pick your collaborators?
I look at collaborations based upon the songs. A song has to speak to you and then [it] tells you who the collaborator is. I don't get up and say I'm going to choose this person. Working with Beres is a bredrin thing because we sit down and drink and talk stuff and rae rae. With Ne-Yo, it's a friendship we've had from before. And he has a love for Jamaica and the culture. We were hanging out a couple of times and a track just came up, and we wrote some lyrics to it. And once we started to produce it, the outcome was nice. 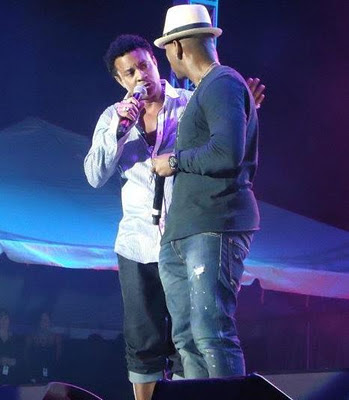 You rank highly among the icons still standing in modern Jamaican music. How do you feel about your evolution as a creative artist?
I'm excited by the fact that I'm still relevant. After all these years, I'm still a force to be reckoned with. A guy who's been at this for over 20 years probably shouldn't have this amount of relevance. So I'm very pleased about that. The main thing is reinvention; you have to try and make yourself as interesting as possible that people will want to be a part of what you're offering. I get bored and I change to different things because I don't want to keep doing the same thing.


Do you spend a lot of time thinking about ventures outside the music biz, like starring in Hollywood films?
Music is what excites me, but in terms of movie roles, it's a couple of them I turned down. I turned down the one that Ja Rule was in [2001's Half Past Dead, opposite Steven Seagal]; that was supposed to be my role.

So Hollywood producers have been reaching out to you?
Yes, man. A lot of people want me to act because I did a short part in [the 2004 comedy] Blast, with Vivica Fox and Eddie Griffin, and they thought the acting was good. But [acting] is just not my thing, and when you don't have a passion for something like that, I don't think you will excel at it. I think I'm more passionate about being the behind-the-scenes guy. If I'm going to do a movie, it would have to be something with a Jamaican flavour to it. I have a few ideas of my own, so it would be me producing and helping with the writing of the script.

I know that being on tour and in the studio so much keeps you away from your family a lot. What's life like as a dad these days?
It's been going great. I have twin girls who are now three years old, and they're my apple. I have two older boys, one is 18 and the other is 16, and they're doing their own thing... So family is good and music still excites me. I can't complain. I look at myself as blessed.

Posted by TALLAWAH Magazine (tallawahmagazine@gmail.com) at 6:19 am