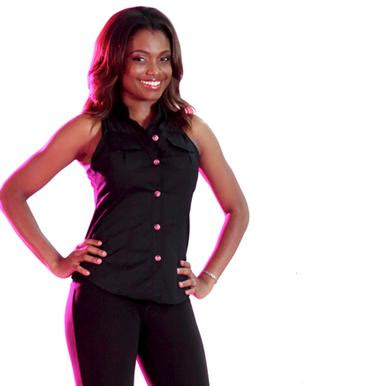 ACTING OUT: Williams says it's her dream to star in a big stage musical.

There's something refreshingly different about Lisa Williams these days, besides the recent career move (Newstalk FM to Nationwide) and the dramatic hair cut ("I'm liberating myself!"). Like Shawna-Kae Burns, she's fully demonstrating just how vastly she's matured as an actress, possessed of artistic credibility and near-effortless conviction.

After turning in solid performances in the recent David Tulloch dramedy Paternal Instinct and earlier works like Not About Eve and Where Is My Father?, Williams is now earning raves for her magnetic portrayal of the female lead (an embittered and fiery young wife) in the sexy-scandalous Taboo, opposite Rodney Campbell, Yendi Phillipps, and writer-costar Keiran King.

She opens up to TALLAWAH about aiming for creative excellence, getting in touch with her inner vixen, her own past relationships, and why it's way more fun playing the b-word.

TALLAWAH: The role of Sabrena demands that you channel your inner bad girl. What were the challenges?
Williams: It was completely out of my comfort zone, so it required more mental energy. I had to really dig deep to find that inner bitch, as [director] Eugene [Williams] puts it. It required a total transformation. Being sexy and flirtatious is not my thing, so the parts I had the most problems with I worked on the hardest. Eugene would send me some long notes, and I would go over them with my script. I love acting, so I'm usually willing to make the extra sacrifice for the character.

Would you say it's more fun to play the bad girl as opposed to portraying a good-natured princess à la Ghett'a Life?
It's more fun, definitely. And I didn't realize it at first, but I like playing [Sabrena]. It's so much fun playing a drunk, and everybody knows that I don't drink. (Laughs). The only thing we have in common is that we are female. And she is committed to her relationship; I totally understand that.

This play also deals largely with people trying to get it right in their relationships. If we were to take a look at your personal relationships history, what would we find?
I have a very normal and healthy history. I haven't had many relationships, about three serious ones, to be honest. I am very meticulous when it comes to relationships. Right now I'm single and I don't mind it because I can focus on my work and my acting. I'm pacing myself a lot more now.

What is your dream role?
Probably something in a musical. I have that singing background that I still want to tap into.

So who is the better kisser: Rodney or Keiran?
Oh my gosh! I never kiss and tell... It's been fun though. (Laughs).

Posted by TALLAWAH Magazine (tallawahmagazine@gmail.com) at 6:17 am