THE SPICE GIRLS: Sexy, funny Ladies has sass and tuneful style to spare 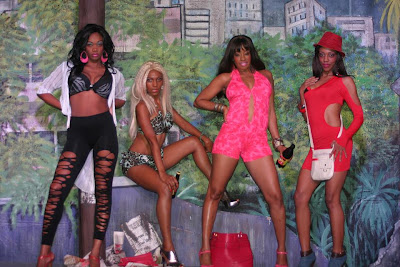 WE WILL ROCK YOU: The working girls strike a pose. Below, Davis and Wilson.

When it comes to penning stories that reflect all segments of the society while eliciting that very inexplicable concept called "Jamaicanness," you'd be hard-pressed to find a more skillful playwright than Patrick Brown, whose latest effort, Ladies of the Night, is an incredibly funny and clever work with emotional heft and a socially relevant message lodged at its core.

Thanks to a solid script and a stellar cast, viewers are ushered into a believable world of night work (of the "selling and buying" variety); ambition to rise above one's unfortunate circumstances; and a cadre of sassy, sexy working girls (prostitutes/hookers, if you prefer) whose ravishing costumes are best described as delicious boudoir chic.

It's a fabulously competent quartet -- Deer, Davis, McDonald-Russell and Patterson convince and tantalize -- wonderfully complemented by the veteran duo of Campbell (doubling up as a bothersome cop and the macho music producer Carlos, who obviously specializes in "talent") and Wilson (as the lispy, handcart-pushing Lothario, Scatta).

If you're even just a tad curious about the daring and dangerous existence that hookers lead -- the secret double life as in the case of Davis' hilarious, hygiene-challenged Juicy, or the physical harm that they often encounter a la Deer's vicious Honey -- then Ladies is the play for you. What's more, as the show outlines, the world's oldest profession can bring on serious psychological strain (like that of Patterson's ditzy-sweet Sugar) or bring out your maternal sensibilities (see McDonald-Russell's mature and protective Cherry). 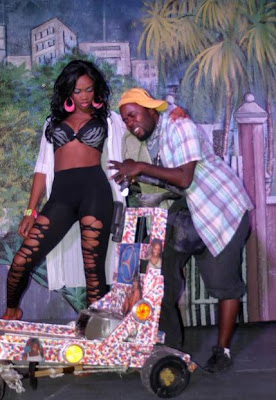 With hardly a flaw to complain about, Ladies of the Night wins you over with its committed performances and a wonderful melange of movement and music (think disco, classical pop and a surprising Norah Jones cameo). When the girls join forces as a harmonious singing group, with the possibility of Jazz & Blues appearance (Sketchy Carlos insists on taking them to the top) the show takes on added charm and lustre.

Co-director Trevor Nairne's set design (street corner and apartment living quarters) is well done and lovely to look at, but during the show, the intermittent set changes do take a while to be properly arranged.

Though the production largely traffics in sex and dark themes like betrayal -- and even the nightmarish prevalance of HIV -- there is a surprisingly buoyant and irrepressible spirit to the whole thing, and I feel it has to do with the inclusion of irresistible, well-choreographed tunes like "Bad Girl" and "The Impossible Dream." Terrific sex, gorgeous girls and great music -- what's a more thrilling combination than that? Tyrone's Verdict: B+

Posted by TALLAWAH Magazine (tallawahmagazine@gmail.com) at 5:50 am