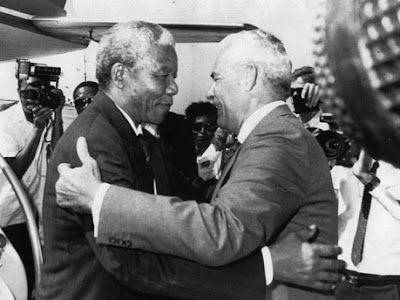 Under the theme "Take Action, Inspire Change, and Make Every Day a Mandela Day," this Thursday's observance of Nelson Mandela International Day is a thoughtful, global call-to-action for people to recognise their ability to have a positive effect on others around them, particularly the young, whether via supporting a charity or serving their local community -- in honour of the ailing South African humanitarian and freedom fighter.

"People are being asked to spend only 67 minutes of their time," explains Mathu Joyini, South African High Commissioner in Jamaica, "to find something that they can do which is of benefit or in service of others." For the record, 67 represents the total number of years Mandela dedicated to his tireless human-rights crusade.

Internationally recognised as a revolutionary, anti-apartheid advocate and the first Black president of South Africa (following his 27 years of imprisonment), Mandela paid Jamaica a visit in July 1991, greeted on arrival in Kingston by government officials led by then Prime Minister Michael Manley.

Mandela: Long Walk to Freedom, a biopic of the South African legend, starring Idris Elba, is due out November 29.