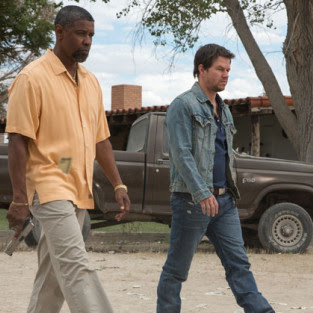 ON THE MOVE: Washington and Wahlberg are men on a mission.

Sporadically entertaining and boasting no shortage of graphic gun violence (even chickens are place in the line of fire), 2 Guns makes a pretty solid case, in spite of its flaws, as to why it’s this summer’s most explosive sidekick action comedy. It’s strongest asset, of course, is the teaming of Denzel Washington and Mark Wahlberg, well-matched as on-the-prowl agents out to topple the empire of a ruthless drug kingpin named Papi Greco (Edward James Olmos). Guns blaze as $43 million worth of dirty money becomes the prime target.

Given the film’s overall set-up, there are slight echoes of Training Day. Washington’s undercover cop Bobby has a roguish streak, but he’s no Alonzo. That’s probably best. In the hands of director Baltasar Kormákur, the bulk of the plot smacks of far-fetched implausibility, but that’s to be expected when the aim is to deliver high-octane thrills, not necessarily a story memorable for its deft pacing and logic. Tyrone’s Verdict: B