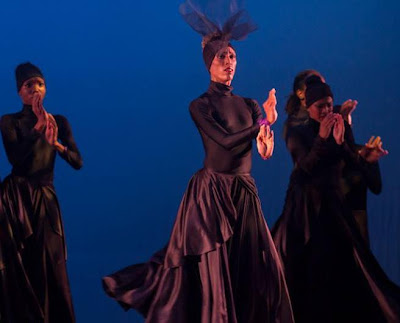 IN MOTION: Henry (centre) leads the corps in this scene from Nettleford's Tintinnabulum.

A sense of foreboding and mystery permeates the opening moments of Tintinnabulum, Rex Nettleford’s 1997 sons-and-mothers masterpiece, which is finding new life among the active works in the National Dance Theatre Company’s enchanting 51st season at the Little Theatre.

It’s a brilliant though lengthy piece (staged in several movements) that, yes, has its dark and dramatic moments but also delivers sequences full of merriment and playfulness. Throw into the mix a rhythmic spiritual energy, lavish costumes and a terrific musical score and the result is the show’s most thrillingly varied and appealing presentation. What’s more, Tintinnabulum bears the reminder to always expect the unexpected when it comes to the NDTC. For the 2013 season that translates to high drama and surprisingly campy thrills.

Among this year’s five new works is Clive Thompson’s riotous and deliriously entertaining Malungu, a new theatrical and ska-infused chronicle of the tragic Don Drummond story, with a competent cast led by Marlon Simms portraying the talented and troubled trombonist, and Kerry-Ann Henry (exuding a spicy Latin flair) as Margarita, the muse Don loved and lost.

At its best, the work is a captivating celebration of Drummond’s musical gifts to the world, even as it illuminates his saddest life chapters, delivered as slices of well-lit experimental theatre, without compromising the appeal of Thompson’s brand of storytelling through movement. 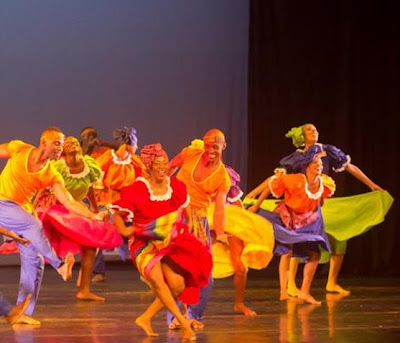 In the end, Drummond as passionately played by Simms, comes across as a tortured artist whose demons got the best of him. Malungu, on the other hand, serves as a stirring cautionary tale centred on a flawed genius and his music.

The blend of eye-popping imagery and wildly energetic choreography that defined Jackie Guy’s 2013 offering Bankra and excerpts from Nettleford’s vibrant Revival was another stellar highlight, fusing Afro-Caribbean elements with tropical flair and the folksy vocal stylings of the NDTC Singers, who later offered a suite of rebel music.

The stage veteran Mark Phinn deservedly received a round of resounding applause for his atmospheric solo Don’t Leave Me, set to Nina Simon’s mournful “Ne Me Quitte Pas”, while Simms’ and Neisha Yen-Jones’ beautifully moving pas de deux Ode to the Lost held a simple yet profound message: parting is such sweet sorrow.