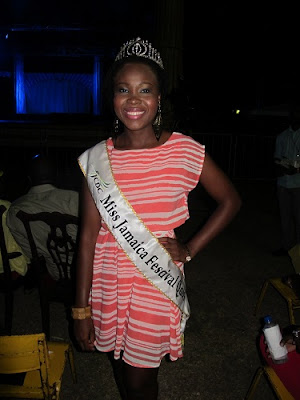 BORN LEADER: "I see myself as an ambassador for Jamaica is what I'd really love to do."

When Kemesha Kelly, Miss Jamaica Festival Queen 2012, reports that the past several months have been nothing short of fulfilling and considerably life-altering, you can't help but believe her. The infectious enthusiasm is all the confirmation you need. Possessed of radiant intelligence and the polished air and self-assurance of an Ivy Leaguer, the St. Ann native (she grew up in Seville Heights) ranks highly among the most fun and sweetly charming national festival queens to come along in recent memory.

"I got to touch so many lives and motivate so many people," says the 23-year-old. "I got to represent my country as a cultural ambassador, and I've thoroughly enjoyed that role and meeting other young people like myself who are involved in building Brand Jamaica."

Last Saturday night, Kelly passed on the baton to Krystal Tomlinson of Manchester. Any advice for her successor? "I would advise her to be her absolute best self because you're being put in a capacity to serve," observes Kelly, whose alma maters include St. Jago High and St. Hilda's. "This is a wonderful group of girls who are culturally aware and active in their communities, and I wish them the very best."

A youth empowerment officer employed to the Ministry of Youth and Culture, Kelly is the sort of groovy girl whose heart beats for reggae. "I'm a big live music fan. I love, love reggae music," confesses the young lady, who has an equally large appetite for engrossing literary thrillers. "I'm also a big Dan Brown fan, so as soon as Inferno came out I had to have it." The verdict? "It is really, really great." reports Kelly, who also cites Ian Boyne (Profiles In Excellence) and Chenelle Taylor (50 Something Dates) as the local authors whose works she's tackled recently.

Asked what the future holds for her career-wise, Kelly is quick with an inspired though unsurprising response. "I see myself as an ambassador for Jamaica; being a diplomat is what I'd really love to do," she tells me. As a writer, she continues, she's had three of her articles featured in international journals. Far from satisfied, she's already eyeing fresh professional territory. "I also want to focus," Kelly says, "on perhaps getting a law degree." Why not?

Posted by TALLAWAH Magazine (tallawahmagazine@gmail.com) at 11:42 am