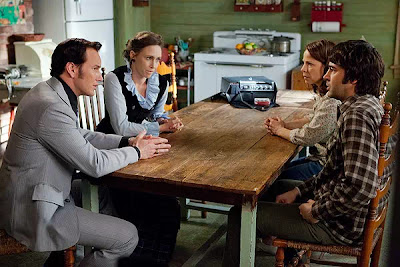 Hollywood's haunted thrillers have a way of liberating your inner voyeur, in the sense that the domiciles at the centre of these films, plagued by supernatural entities, are not exactly your kind of scene. Still, the idea of having a cinematic glimpse into what can transpire behind those fearsome doors is enough to seize your attention, and indeed, your imagination.

The Conjuring. While its genuine fright quotient is relatively low, the well-crafted film packs and old-fashioned mix of suspense, intermittent chills, and the depiction of a bizarre string of events said to have been inspired by real-life events.

When the Perrons, a husband-and-wife duo (played by Sex and the City's Ron Livingston and Lili Taylor) and their daughters move into a secluded fixer-upper in Harrisville, they have no idea what they're in for. The quaint house, we learn, dates back several generations and has a history of paranormal activity (the destructive kind) that is unleashed whenever new inhabitants choose to take up residence.

Playing another husband-and-wife pair, Patrick Wilson and Vera Farmiga offer arresting performances as Ed and Lorraine Warren, whose expertise in dealing with the supernatural is solicited by the family as they teeter on the verge of collapse. What ensues is the most horrifying case of their lives, as they battle the demonic entity, climaxing in an edge-of-your-seat exorcism.

Posted by TALLAWAH Magazine (tallawahmagazine@gmail.com) at 9:34 am