THE CHANGELING: From TV to the stage, Pepita Little ready to bring the heat in Internet Affair 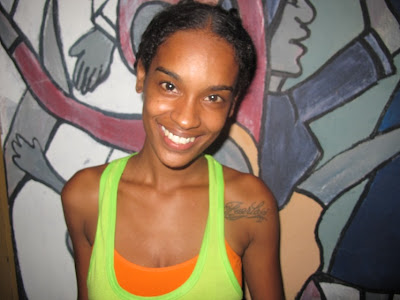 If there’s something that doesn’t shock people when they encounter Pepita Little, the well-known TV personality, is that she is a lot of fun. What many are surprised to discover, though, is that she’s just 22. Already, the fashionably thin chica has banked time on the small screen as host of TV J’s entertainment programme Intense, Digicel Rising Stars’ Chill Room and the Tastee Talent Trail.

With her sleeveless shocking green top and sweet demeanour, Pepita at first seems more like an easygoing college freshman, as she chats with TALLAWAH backstage at the Pantry during a recent rehearsal. Yet once she starts talking about her life now, you’re struck by, among other things, her ambition and her dedication to leaving a lingering impression on viewers who come out to see the production.

In the show, Pepita plays a feisty chick sashaying into the life of another woman’s man. “I’m very nervous but excited,” she says, with a river-wide smile, of her impending big stage debut. “I’m really looking forward to hearing what people have to say about the show. I’m not really worried about the negative comments though. I just want to focus on doing a good job and showing the audience what I can do.”

Considering the love triangle at the heart of the plot, I ask Pepita is she’s ever found herself caught in such a relationship dynamic. “Yes,” she tells me emphatically, “but I didn’t know that I was until much later. But I was the good girl though.”

Whether talking about making a living in television (“It’s been fun, hectic and hard.”) or her mother’s passing when she was only eight (“It teaches you to appreciate other people’s mothers.), Pepita, who grew up in Port Royal, has no trouble speaking her mind. Apparently, she brings that same refreshing fearlessness and fierceness to her role in Internet Affair.

“I think audiences will enjoy her on stage,” predicts Cooke. “She gets into the character, and I think she is surprising herself, too, because she doubted at times whether she could do the role. I don’t think she knows how good she is on stage.”