THEN AND NOW: Delano Franklyn talks sports, strength, and the enduring relevance of Michael Manley 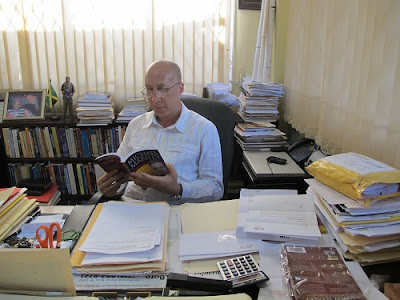 ALL IN A DAY'S WORK: Franklyn, photographed for TALLAWAH inside his Kingston office.

The first thing you notice upon entering Delano Franklyn's roomy law office in Kingston is the series of thick case files spread across his work desk, covering nearly 80 percent of the surface. Then the books come sharply into view. Rows and rows of fascinating titles neatly lining the bookshelves. Mainly biographies, Franklyn later tells me, of such key global political figures as Mikhail Gorbachev, Margaret Thatcher, Che Guevara and Bill Clinton. Lying on a sofa across from the desk is a plastic case holding three copies of Michael Manley: Putting People First (Wilson, Franklin and Barnes Publishers), Franklin's latest book and the main reason I'm here on Connolley Avenue in the late afternoon on a golden Friday.

According to the author and noted attorney, few political statesmen in Caribbean history match Manley when it comes to, among other qualities, sheer visionary leadership. "Michael Manley, to me, is arguably the best Prime Minister that Jamaica has ever produced," concludes Franklyn, currently chair of the Michael Manley Foundation, whose annual lectures, delivered by "prominent, knowledgeable Jamaicans" (Dr. Stephen Vasciannie, Dr. Barbara Gloudon, among them) make up the book's nearly 300 pages. For the record, Franklyn's next book, The PNP at 75: Looking In, Looking Out, arrives in mid-September.

TALLAWAH: What is it about Michael Manley that continues to inspire you even today?
Franklyn: I'm inspired by the fact that Michael Manley was a man way ahead of his time, in terms of his ideas. And most of what he emphasized then is coming to fruition, especially the idea of "Eat what you grow, grow what you eat."

What about his leadership style?
He represented for me the kind of leadership that challenged many of us to give of ourselves to national service.

Besides the law and Manley's political legacy, where do your interests lie?
I really enjoy outdoor sporting activities. Track and field, cricket, netball, basketball, you name it. I watch and follow them very closely.

Did you play any sports while at Kingston College?
Well, in school I largely followed the games. Outside of house sports, I didn't participate much.

Speaking of which, the Moscow World Championships are scheduled to commence any day now. What are your expectations of Team Jamaica?
I expect us to do very well. Regrettably, we are faced with some very serious challenges because a number of our outstanding athletes are out due to positive drug tests. That will have a definite impact on our performance at the championships. I expect Usain Bolt to come home with three medals. No doubt about that. I also expect us to perform very well in the sprints.

How best can our athletics fraternity move forward after being dealth such a hard blow with the doping violations?
I think the best way to address such a regrettable situation facing our athletes is for us to continue to do well. Our Jamaican brand has been impacted as a result of what's happened. Everyone involved in track and field must ensure that they do everything to protect the credibility of Jamaica. 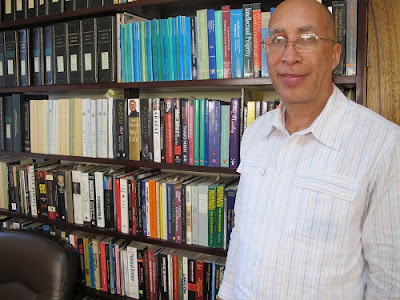 Finally, what are you most grateful for at this stage of your life?
I'm very thankful for the strength to be able to operate on a day to day basis, as a consequence of which I don't worry and I choose not to live in the past. I just wish I had more time.

Posted by TALLAWAH Magazine (tallawahmagazine@gmail.com) at 11:47 am