BUILT FOR SPEED: Ethan Hawke is in a race against time in zippy-zany Getaway 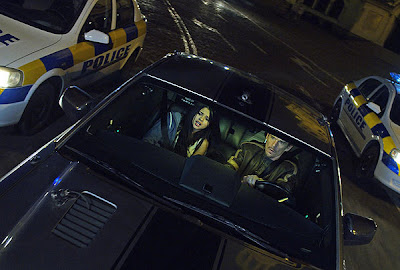 REVVED UP: Hawke and Gomez get a crash course in the fast lane.

Action thrillers don’t come with more mayhem and madness than this. In this month’s Getaway (now playing on the Palace Cinemas circuit), Ethan Hawke steps into the role of Brent Magna, a former pro racecar driver caught in a (literal) race against the clock to save his wife from a terrible fate.

She's been taken hostage by the same lunatic supplying Hawke with phone instructions (Jon Voight), and if he fails to carry them out, “it’s all over.” (Sounds familiar?) Along for the dangerous ride is Selena Gomez (billed as The Kid), who gets trapped in the insanity after a poorly executed carjacking. Thrown together, they must outwit their unseen tormentor (who has rigged the car with multiple cameras to govern their every move) before it’s too late.

As directed by Courtney Solomon, the film’s premise contributes nothing new to the fast-and-furious genre, and the far-fetched sequence of events teeter on the precipice of the preposterous. But, on the upside, you can’t deny the riveting, edge-of-your-seat thrills that the intensely choreographed chase scenes (through Sofia, Bulgaria) occasionally offer -- and you’ll eventually find yourself rooting for Hawke (and his cheeky young sidekick), playing the selfless husband-hero, as things build to a zippy-zany climax. Tyrone’s Verdict: B-