SHINING TIME: Tessanne Chin wows in the spotlight on NBC's The Voice 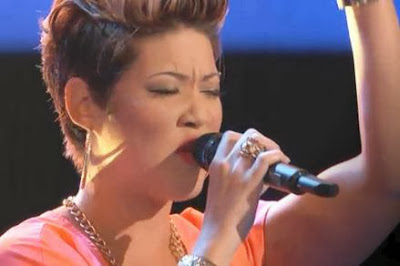 SING IT OUT: Chin makes an impression with her talent-show audition.

Songbird Tessanne Chin is getting much love in the international press, thanks to her stint as a contestant on NBC's hit reality show The Voice, which is now back for its fourth season. Under the headline "Will Tessanne get all four judges to turn around?, Entertainment Weekly writes, "She hardly even had to try. Tessanne Chin makes her incredible version of Pink's "Try" seem effortless as she takes The Voice by storm on Tuesday night's episode."

Check out a sneak peek of her performance here and watch as the judges squabble over our unique vocal talent. So it seems our girl is a hot commodity and everyone wants to know who she will choose as her coach. As EW speculates, will Adam (Levine) get her to keep saying "bread and butter" or will Cee Lo's flattery get him everywhere? The Voice's second episode of the new season airs on NBC at 8pm next Tuesday night.