SINGING HER SONG: Tessanne Chin on The Voice and rising above industry setbacks 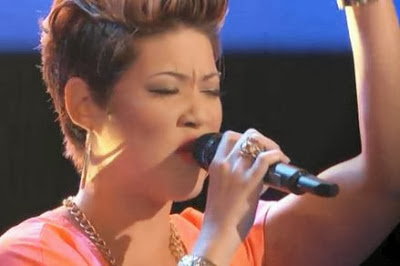 IN TUNE: The singer in performance as a superstardom hopeful.

Powerhouse Jamaican songstress and The Voice contestant Tessanne Chin was recently a guest on RJR's Beyond The Headlines, where she rapped with Dionne Jackson-Miller about her stint on the NBC talent reality series, currently in its fourth season,  and rising above industry setbacks. Below, a few excerpts from their conversation:

On opting to do The Voice:
"I've always felt that I wanted an international career. I grew up admiring singers like Celine Dion and Whitney Houston, so that's where it kind of started for me," says the sultry singer. "So why not go out there and see what happens?"

On getting the judges' four-chair turnaround, a competition rarity:
"I was so overcome. As a young singer, you do what you do, but getting that kind of validation floored me. When that happened, I had to call upon that sense of professionalism." (Laughs).

On covering Pink's power ballad "Try":
"For me, that was me getting up and trying again. People see you and your success, and they don't know that you've been through so much in the industry. I've experienced a lot of No's, so I felt that song was fitting."