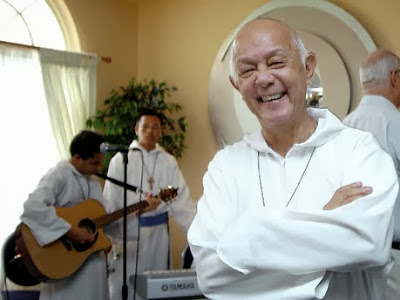 THE RIGHT NOTE: "We definitely want our music to be visionary; music with a purpose."

Father Richard HoLung's much buzzed-about new biography Candles in the Dark reveals past and present struggles - and his passion for helping the less fortunate. Still, the book doesn't skimp on the fact that he's a charismatic singer-songwriter and entertainer who remains in tune with the pulse of Jamaican music and continues to lead the Missionaries of the Poor well into another decade. TALLAWAH catches up with the 74-year-old living legend to talk about the book and the way forward for the MOP ministry.

TALLAWAH: How did the collaboration with St. Benedict's Press, writer Joseph Pearce and you come about in bringing this book to life?
Fr. HoLung: They just approached me about doing it because they felt that it was a story that needed to be told. I think it's a well-written book. It depicts the life of the brothers with amazing detail, as well as the conflicts and difficulties that have come my way over the years.

Elaborate on the nature of the conflicts you speak about?
Well, in the seventies and eighties, many were against the work of the Missionaries of the Poor, and I was against a lot of the injustices that I saw taking place. So the book decribes it all in great detail.

So, on reflection, would you say it all was worth it?
Oh yes. I look at the achievements and what we've come through as a good thing.

What inspired this Greatest Hits production?
These are mainly songs that I wrote over the years. I thought it was a wonderful idea to do a show of thus mature because it includes not only our senior singers but also the Kids of Father HoLung & Friends, which is three years old, but they have been doing beautifully.

What's next for MOP? Where does the ministry go from here?
We definitely want our music to be visionary; music with a purpose but also speaks to the struggles in life. It's important that the songs look at that deep inner search.