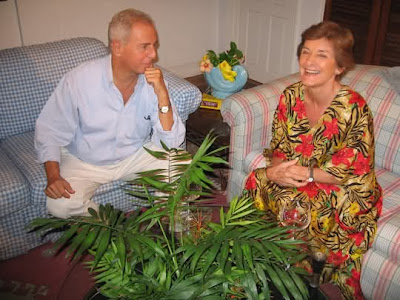 "I can't believe it's gone on for over 20 years, but I'm enjoying it and being a part of it," is how actress Beth Hyde sums up her reflections - and her involvement with - one of local television's most well-known and long-running shows Royal Palm Estate and its equally soapy spin-off The Blackburns, where Hyde continues to show flashes of dramatic brilliance and throw lady-of-the-manor temper tantrums as the enduring Julia Blackburn. "Julia's part has changed quite a lot," she tells TALLAWAH at a recent exhibition opening. "Now she's not a very nice person," she adds, with a chuckle.

Even so, the 75-year-old thespian, an avid art lover, relishes the experience of being part of something that continues to impact the cultural psyche in its own way. "As an actress, many years have passed since I've been in this industry," Hyde says. "Now I'm a retired citizen, but the show keeps me busy. It adds a bright light to my life."

Thrice divorced (a fact she doesn't necessarily conceal), and the mother of grown sons Duncan and Adam (the show's Richard Blackburn), Hyde is among those golden girls for whom age ain't on the page. "I'm 75, but I don't look it," she resports matter-of-factly, "and I certainly try not to act it."

Posted by TALLAWAH Magazine (tallawahmagazine@gmail.com) at 10:40 am