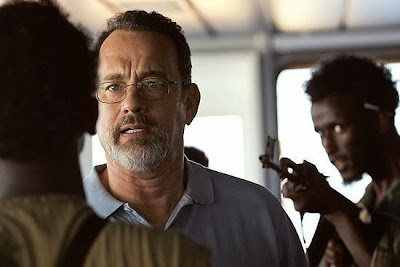 What was supposed to be a routine voyage at sea for American captain Rich Phillipps (Tom Hanks) and his nimble crew quickly morphs into a life-and-death mission, when their vessel is hijacked by a gang of Somali hoodlums (they are referred to as "pirates").

Equally engrossing and horrifying, Captain Phillips is the kind of based-on-actual-events tale heavy on dramatic intensity and emotional heft -- and benefits from director Paul Greegrass' knack for riveting suspense.

And when it comes to blending nuance and charismatic conviction, few leading men in Hollywood can match the larger-than-life Hanks, who delivers his strongest screen performance in years -- an awards-baiting portrayal of quiet decency and remarkable grace under fire. Tyrone's Verdict: A-

Posted by TALLAWAH Magazine (tallawahmagazine@gmail.com) at 10:45 am