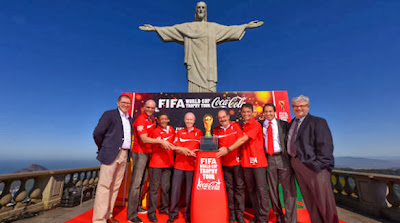 A SENSE OF PLACE: FIFA officials pose with the trophy in 2014 host country  in Brazil. Below, a Jamaican fan inside the National Indoor Sports Centre.

"It is exciting because we are seeing the Cup, and it kind of highlights our country's interest in football," gushes Frances Hibbert, a 21-year-old UWI Mona undergrad who was among the hundreds of Jamaicans who descended on the National Arena and the National Indoor Sports Centre in Kingston on the weekend to get up close and personal with the FIFA World Cup Trophy, the most coveted prize in global football. The golden statuette is on an 89-country tour, with Jamaica selected as one of three Caribbean countries to host the event being sponsored by Coca-Cola.

"It's been amazing. Seeing the people collecting their pictures with the Cup and the smiles on their faces has been one of the many highlights of us being in Jamaica," offers Maritza Ballack, Coca-Cola's brand manager for Trinidad & Tobago, pointing out that the tour next moves to the Cayman Islands. On Sunday, inside the Arena/NISC was abuzz with energy, as the Fan Experience kicked into high gear.

A three-part tour, it commenced with with activities ranging from wall signing and mini football exhibition matches to FIFA-endorsed video game sessions and the introduction of the official World Cup mascot, Feluco. Special appearances by PM Portia Simpson-Miller in the late evening and a performance by hip-pop star David Korey, who performs the official World Cup anthem, highlighted Sunday evening. 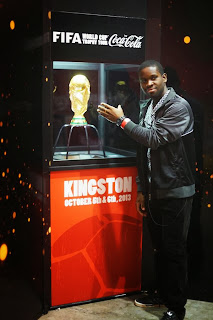 Part Two took you inside a Hologram Room, where a gigantic screen offered a visceral, euphoric depiction of World Cup history and preparations back in Brazil, the 2014 host country. The third and final segment of the tour was inside the NISC, where attendees formed a queue to not only have an up-close moment with the golden statuette (safely enclosed in a glass case), but also have their photographs taken next to it, capturing a once-in-a-lifetime moment to cherish, if only via Kodak lens.

"Even though we are girls, we like football. That's why we're here," says Hibbert, standing next to her friend Shaniece outside the NISC after taking the tour. "We are really looking forward to watching the World Cup next year."