IT TAKES A VILLAGE: Humour and heart -- and buoyant community spirit -- give Jamboree its spark 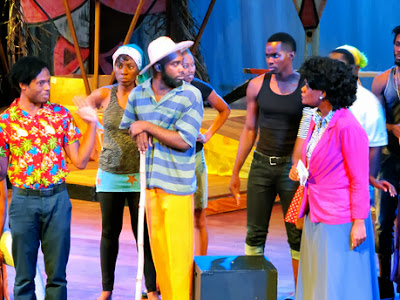 OLD STORY TIME: Cast members in a scene from the new musical drama.

A lively and rhythmic song-and-dance production like Jonkanoo Jamboree, with its community-based shenanigans, melodically catchy musical numbers and vibrant choreography, has the pace and feel of an LTM pantomime. (Side note: It's rather lengthy, too.) But what sets Jamboree apart has got to be its estimable acting ensemble. Fierce, standout performances come from Nadean Rawlins, Shawna-Kae Burns, rising star Danar Royal and fast-emerging leading lady Julene Robinson, who delivers a charismatic, career-making turn as sturdy matriarch Miss Precious.

Working with a script by Aston Cooke (who, as it happens, has collaborated with the LTM in the past), director Michael Holgate (his Ashe roots on vivid display here) fashions a stirring show that's part musical drama, part cautionary folktale marked by a sense of old-fashioned Jamaican storytelling, youthful angst and the timeless concept that it takes a village.

Certainly no ordinary village, the closely knit community of Jonkanoo is rocked to the core when negative elements led by one Mr. Buckingsworth (Bryan Johnson, compelling) hatch a plot to tear down the villagers' homes to usher in an era of golf courses and palatial high-rises. Of course, the residents will have none of it -- and the same goes for the protective ancestral spirit Mama Lundi, who at one point makes her presence felt. Throw into the mix a dance-contest rivalry between Jonkanoo Village and the neighbouring Quadrille Heights, home to a mean=spirited bunch of society women (their leader is played by a delicious Susie Braham).

Given that the play weaves so many threads, it comes as no surprise that the show occasionally loses its way and surpasses the reasonable two-hour mark. Still, its best bits do have plenty of heart, colour and emotional resonance: Royal impresses as the good son and community hero; Shanique Brown brings the funny as loudmouthed Gizzarda; Fabian Thomas spares no punches as the insufferable ASP Clappers and the double delight of Rawlins (fresh-from-foreign doyenne Mrs. Terrelonge) an Burns (good-natured Mrs. Buckingsworth) as superb as mother figures with hearts of gold and iron-lady tendencies.

Though a tad overlong (nothing a little trimming can't fix), Jonkanoo Jamboree is energetically orchestrated and hugely enjoyable (quite a few of the songs are bonafide highlights) -- and offers a fine example of irrepressible community spirit. Tyrone's Verdict: B