IT WAS THE SINGING: The University Singers remount 2013 season with passion and gusto 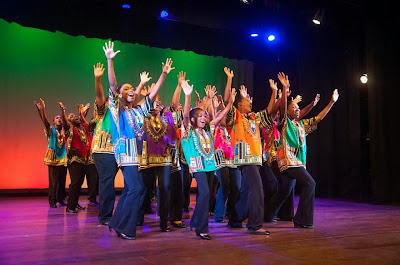 RAISE YOUR VOICE: The Mona-based choir centrestage at the Philip Sherlock Centre.

Black power anthems, hymns of praise, humourous folk gems: the University Singers, as is customary, reliably deliver a sense of diversity to the stage.

So full of life, these talented choristers (a family of veterans and neophytes) consistently appear to be having a ball onstage, and it was endlessly  thrilling to take in last weekend's remount of their 2013 concert season, which brought enlivening sizzle and melodic sparkle to the Philip Sherlock Centre.

Their uniquely lush choral harmonies aside, what the University Singers do so well, and indeed what sets them apart, is the opulent blend of genres (classical, pop, reggae) they specialize in, with a streak of refreshing and distinctly Jamaican tunes, timeless and modern.

Usually given exquisite arrangements, the choir's repertory has a tendency to make vintage grooves -- and even recent dancehall hits -- feel and sound fabulously new.

>> Power and Passion: TALLAWAH'S June review of the concert season