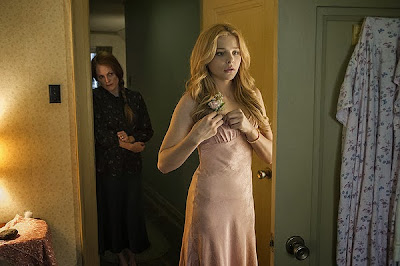 TEENAGE DREAM: Moretz and Moore co-star in the reboot of an old classic.

They will remember her name is an apt tagline for the tragicomic teen horror-thriller Carrie that’s been enjoying a 2013 big-screen reincarnation, thanks to director Kimberly Pierce and an attractive cast headed by Hollywood teen sensation Chloe Grace Moretz (Kick Ass, 500 Days of Summer) as the titular heroine and the ever-divine Julianne Moore as her eccentric mother.

With its classic Stephen King source material and dark central themes of revenge and despair, the film chronicles the story of shy high-schooler Carrie White (Moretz), who is terrorized by her cruel peers and controlled by at home by her mom (Moore), a religious zealot. Carrie is a special girl blessed with telekenesis (the ability to move objects with the mind), but, sadly, her gift proves both a blessing and a curse, as the people of her small town soon discover.

Pierce, who helmed the critically acclaimed 2005 ensemble drama The Dead Girl, seems acutely interested in stories that examine the fates of their conflicted young protagonists. In adapting Carrie and retooling it for the Instagram generation, the brave filmmaker had her work cut out for her. In the end, it's a gorgeously shot hit-and-miss affair. In addition to some tonal inconsistencies, the film is surprisingly low on the requisite thrills that made the original such an unqualified success.

The performances by Moore and Moretz, though strong, are noticeably inconsistent. (Ansel Elgort is a refreshing presence as a likeable jock and Carrie's crush.)

While this Carrie is not the triumph it could have been, today's tweeting crowd of moviegoers will certainly appreciate the modern-day update of an 80s classic that made Sissy Spacek a star and gave a whole new meaning to the term killer prom. Tyrone's Verdict: B-