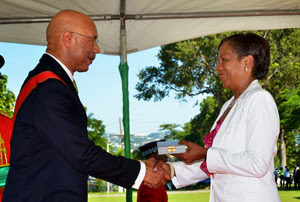 As in years past, on Heroes' Day the lawns of King's House were teeming with high-profile personalities, political figures and extraordinary Jamaicans of all walks, as the country paused to pay tribute to this year's batch of stalwarts and unsung heroes whose exemplary efforts in their respective fields (public service, academia, sports, arts/culture, among other areas) have in some way contributed to national growth and development.

The Order of Distinction (in the rank of Commander) was bestowed on the likes of Dr. Fenton Ferguson, Audley Shaw, Bryan Winter, Dr. Carolyn Cooper and Lorna Goodison. Simon Crosskill, Clare Forrester and Charlie Chaplin were among the Officer class honorees. Meantime, over 20 members of the uniformed forces received medals of honour for gallantry and meritorious service.

Posted by TALLAWAH Magazine (tallawahmagazine@gmail.com) at 10:40 am